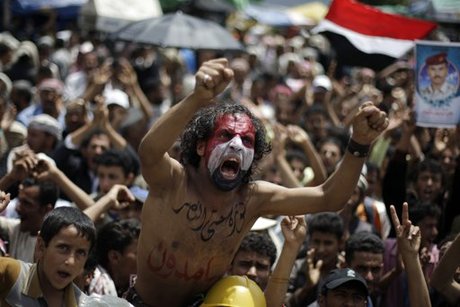 A Yemeni journalist detained last week by dissident General Ali Mohsen al-Ahmar said Tuesday that he had been freed.

Mohammed Sudam, a Reuters reporter who also works as an interpreter for President Ali Abdullah Saleh, was detained Friday night at a checkpoint manned by Ahmar's troops on the way home from the airport after a trip to Cairo.

A Yemeni security official, speaking to AFP on condition of anonymity, said Sudam was freed in exchange for the release of five officers from Ahmar's First Armored Division, detained by security forces loyal to President Ali Abdullah Saleh.

Dozens of Yemeni journalists held a sit-in on Monday to demand Sudam's release and appealed to Yemen's new Nobel peace laureate, activist Tawakkul Karman, to intervene on his behalf.

In a statement to the press Monday, Ahmar said he was unaware that Sudam was a journalist and promised to release him.

Ahmar's First Armored Division, which controls part of the capital Sanaa, defected in March in support of anti-regime protesters and has since set up checkpoints in areas under its control.

Kidnappings of army officers and government officials have become increasingly common since Ahmar's defection and the outbreak of clashes between his troops and Saleh loyalists in Sanaa.