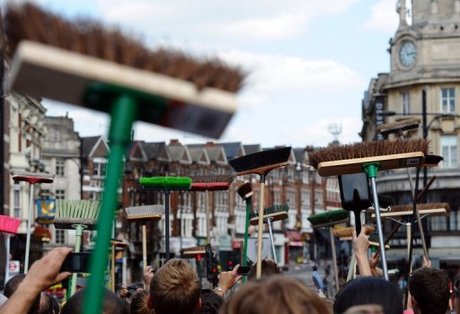 A cash-strapped Spanish town has surprised its residents by asking them to pick up a broom and sweep their own streets and pavements.

The official request by the mayor of Esparreguera, a town of 22,000 people in northeastern Spain's Catalonia region, did not go down well with all inhabitants.

"The town hall does not have the financial means at the moment to improve municipal cleaning and gardening services," said the request by Mayor Joan-Paul Udina of the moderate Convergence and Union party.

"To return to the habits our grandparents had, we ask you to regularly sweep the portion of the pavement and road in front of your house," he said.

Townspeople were also asked to water municipal trees and gardens outside their front doors "with clean water" and without dirtying the road.

"I am unemployed. I don't earn anything. And in addition they want to put me to work for free to clean the rubbish," fumed 53-year-old Jose when asked for his reaction.

"There are still sweepers here. It is not true that there is no money to do it, we pay our taxes," said the former Seat car factory worker who has been seeking work for three years.

In addition to saving money, the plan aims to improve "co-existence, quality of life and respect for the public space," the town ordinance said.

But Dolores Serrano, 56, said it was an "excellent idea".

"I have already watered the tree in front of my door because I don't want it to die," she said, adding the mayor had issued a simple request, not a directive.

Spanish towns are hard up. By the end of June, municipal debts amounted to 37.64 billion euros ($51 billion), or 3.5 percent of gross domestic product. In addition, the country's 17 regional governments have a total debt of 133.172 billion euros, or 12.4 percent of GDP.