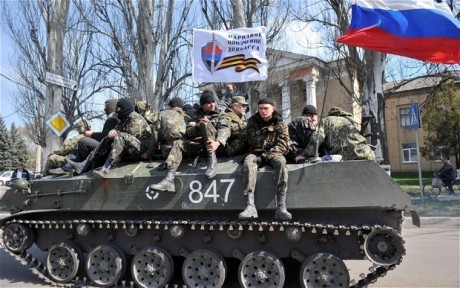 Artillery fire rocked the outskirts of the rebel-held east Ukraine city of Donetsk on Sunday in the latest clashes to rattle an internationally-brokered ceasefire between pro-Russian separatists and Kiev.

The sound of intensive explosions erupted at 9:00 am (0600 GMT) and appeared to come from the area around Donetsk airport, one of several flashpoints where shelling has rumbled on despite the February truce deal that has eased fighting around much of eastern Ukraine.

It said there had been three injuries in its ranks but no deaths.

In the separatist stronghold of Lugansk, the army also came under fire from small arms and heavier 120mm mortar shells, according to an official statement.

The overall rate of fighting has declined sharply since the peace deal, which obliges both sides to stop shooting and withdraw heavy weapons, was hammered out by the leaders of France, Germany, Russia and Ukraine.

However, sporadic clashes with small arms and shells have continued on a near daily basis at hotspots including the airport and around the key government-held port city of Mariupol.

According to the army, militants fired 120mm mortar shells overnight at the village of Shyrokyne, around 20 kilometers (12 miles) east of Mariupol.

Many fear that the steel-making hub -- the largest major city held by the government in the conflict zone  -- could become the focus of a new offensive, opening up a corridor between rebel-held territory and Russian-annexed Crimea.

He also accused separatists of twice using artillery prohibited by the peace deal near the village of Avdiivka, north of Donetsk.

Under the terms of the ceasefire, the two sides agreed to pull back their heavy arms to create a buffer zone of between 50 kilometers and 140 kilometers (31 miles and 87 miles), depending on the range of the weaponry.

The warring parties both claim to have withdrawn their big guns but the Ukrainian military on Friday accused separatists near Shyrokyne of using the heavy Grad multiple rocket system for "the first time in a month".

The supposed drawback is being monitored by the OSCE, but the international observer mission on Thursday said it had been unable to verify a credible withdrawal "because of a lack of cooperation on both sides".

Moscow on Saturday claimed that Kiev might be "bluffing" over it weapons withdrawal.

Ukraine President Petro Poroshenko, however, insisted late Saturday that Kiev was adhering to the peace deal.

"Firstly, we ceased fire, secondly, we withdrew heavy equipment and artillery, thirdly, we ensured active work of OSCE monitors, who are able to check the implementation of these agreements".

However, Poroshenko warned he would respond with force in the event of any new large-scale attack.

"We are not daydreamers and we are doing everything so that if, God forbid, there is an offensive against Ukraine, we can repel the enemy with all our force and defeat it."