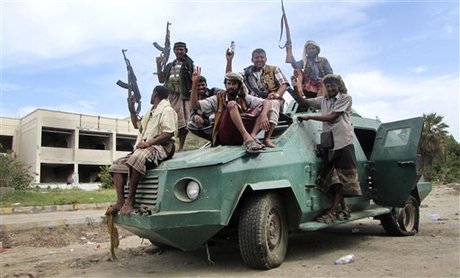 The Shiite Huthi militia, backed by troops allied to former leader Ali Abdullah Saleh, clashed with forces loyal to the president in at least two southern provinces as they pushed on Aden, sources said.

In another southern city, Taez, the militia shot dead five demonstrators as protests intensified against the Huthi presence.

The militiamen have seized control of large parts of Yemen and in recent days have been moving toward Aden, where Hadi fled after escaping house arrest in the capital Sanaa last month.

Yemen, a long-time U.S. ally which borders Saudi Arabia, is increasingly divided between a north controlled by the Huthis, allegedly backed by Iran, and a south dominated by Hadi supporters.

The U.N. Security Council, Western countries and Gulf Arab monarchies have backed Hadi as the country's legitimate ruler and his foreign minister called on Monday for a Gulf intervention to confront the Huthis.

Tuesday's clashes came after the Huthis seized the airport and a nearby military base Sunday in Taez, 180 kilometers (110 miles) north of Aden and seen as a strategic entry point to Hadi's southern refuge.

Tribal sources said at least 30 people died late Monday as the Huthis and their allies clashed with armed tribesmen loyal to Hadi in the central Baida province and in Marib, east of Sanaa.

The Huthis have been increasingly joined in the fight by troops loyal to Saleh, who resigned in 2012 following nationwide protests but has been accused of allying with the Shiite militia as he seeks to regain influence.

Military sources in south Yemen said that reinforcements from the army's al-Hamza Brigade -- still loyal to Saleh -- had been sent south from central Ibb province to the town of Qatabah, some 120 kilometers (75 miles) north of Aden.

Dozens of tanks belonging to the 133rd Brigade, also loyal to Saleh, were sent to Qatabah, military sources and witnesses said.

These troops clashed with Hadi supporters in the surrounding province and took control of the headquarters of the local government in provincial capital Daleh, military and security sources said.

Clashes also erupted in the town of Kirsh, in the province of Lahj -- about 75 kilometers (50 miles) northwest of Aden -- where forces loyal to Hadi had deployed in anticipation of an attack.

"Hadi has asked the U.N. and the (GCC's) Desert Shield force to intervene and confront the Huthis," Yassin said Monday in an interview with Saudi-owned al-Hadath television.

"Yemen has asked the U.N. Security Council to impose a no-fly zone on airports seized by the Huthis," he added.

The Shiite Huthis, who hail from Yemen's mountainous north, have not been welcomed by the mainly Sunni residents in other parts of the country and have cracked down on protests against their presence.

Five people were killed and about 80 wounded when the Huthis opened fire Tuesday as demonstrators gathered for the third consecutive day to protest the militia's arrival in Taez, a local official and medics said.

They also shot dead three others among a crowd that protested at a Huthi base in al-Torba, just outside Taez, a local official said.

Huthi leader Abdulmalik al-Huthi in a televised speech Sunday called for his supporters to mobilize for an offensive in the south, condemning Hadi as "a puppet in the hands of forces of evil, led by the United States."

The Huthis have clashed with Hadi loyalists, local tribes and Sunni Islamist groups including the powerful local branch of al-Qaida, which Washington has repeatedly targeted with drone strikes.

Where is anonyme to say "they brought this upon themselves"?

Wait Mowaten - unfortunately the history of Shia in the region has been of unrelenting expansion until the majority get sick and tired and rally around a strongman who will smack them down and commits terrible atrocities. If you are wondering why some strands of extreme Sunnis consider Shias kuffars - that is why! The Shiite population has been used as Cannon fodder for the benefits of few and that created continuous Fitna inside the world of Islam.

Mystic - the retard is you who has no sense of history and only repeat canned propaganda line in service of your destructive masters. Unfortunately, you support a path of un-ending destruction and death. Yemen, with Hady, had a future. Now none.

Too bad your Hadi, is fleeing everytime battle reaches him. The coward, just like M14.

Oh - you are such a fool. He may be not as blood-thirsty as your Houthis or fanatical as your apocalyptic cult (and I do not mean here Shia but this idiotic Messianic version of Shiism propagated by the Mullahs of Iran to justify the building of their empire on the expense of stupid Arabs like you). But after he is gone, you will end up facing the Sunni Apocalyptic cults of Dahesh and AL Qaeda. Good Job!

but but but the huthis said: Peaceful means will be used to resolve conflicts in accordance with the constitution. They also said the same thing in Lebanon.

actually it seems like the governor of taez called for escalation and asked his supporters to "dismantle" the checkpoints... the AFP report isnt telling the whole story.

you would do anything to justify the murderous actions of your militias. Are these checkpoints the legal Yemeni Army or your sectarian militias>? The other sectarian says"nobody listened, so they went to the next level", and that gives them the right to fire on and kill peaceful demonstrators.

I only gave facts, told the missing part of the story here. If you call that justifications it means you consider that this is what they are.

As for your use of the word "murderous" it is obviously out of place, when soldiers are being attacked by a crowd they are not committing "murder", they are defending themselves. Blame the governor who deliberately sent them to die so they could be a number in media reports.

cannot believe what I am reading. You are finding excuse for an armed militia that is firing on civilians!

hahahah what a hypocrite. when anonyme was justifying the bombing of 3 mosques and the killing of hundreds of people you had no problem with it, did you?

@mowaten. Who said that i had no problem with the bombing of the three mosques. I do not give a dam wether about the religion of the people being killed. All what matter is that people are being killed and that is condemnable.

FT - plight!!! Are you kidding me! Despite being a minority, Zaidi president has ran Yemen for much of its recent history. Zaidis controlled much of the army and high positions in government. Stop talking nonsense.

n another southern city, Taez, the militia shot dead five demonstrators as protests intensified against the Huthi presence......
HA killed only one protesters (even though he was Shiite)

General Qasem Soleimani “Today we see signs of the Islamic revolution being exported throughout the region, from Bahrain to Iraq and from Syria to Yemen and North Africa”.
General Mohammad Ali Jafari “The Islamic revolution is advancing with good speed, its example being the ever-increasing export of the revolution”.