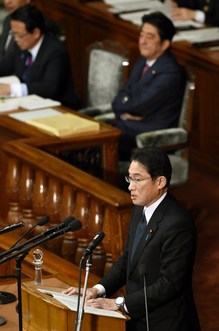 Japanese Foreign Minister Fumio Kishida could visit Cuba next month, a report said Thursday, becoming one of the highest-profile visitors to the isolated island since a thaw began between Washington and Havana.

If the visit goes ahead, Kishida is expected to call for closer ties with Cuba, where Japanese companies can invest in infrastructure projects and mineral resource development, Japan's public broadcaster NHK said.

Kishida may make the visit in late April when he travels to the United States for a meeting on the UN nuclear non-proliferation treaty and to hold security talks with the U.S. side there, it said.

It would make him the first Japanese foreign minister to visit the communist island, the broadcaster added.

The move comes after Washington and Havana in December announced they would set aside their Cold War enmity and renew diplomatic ties.

During his visit, Kishida may hold talks with Foreign Minister Bruno Rodriguez and other Cuban officials, NHK said. The two foreign ministers met in Tokyo in 2013.

Japan and Cuba have maintained diplomatic ties but their channels were limited due to the discord between Cuba and the United States, Japan's key ally.

Asked about the reported visit, a foreign ministry official only said: "Nothing has been decided yet."