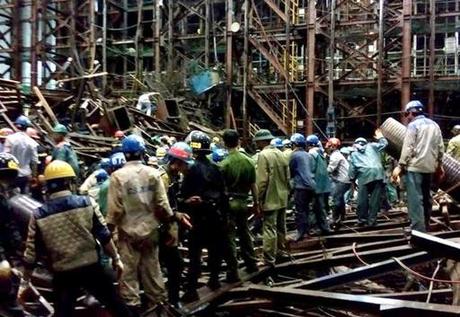 At least 14 workers were killed and dozens more injured after scaffolding collapsed at a steel plant in central Vietnam, officials said, as rescue teams Thursday searched for bodies still trapped in the wreckage.

The laborers were building concrete blocks as part of a seawall project when the accident took place late Wednesday in the coastal province of Ha Tinh, said Le Minh Dao, office manager of the provincial People's Committee.

"We have pulled out 12 bodies. Two other bodies will soon be rescued from the rubble," Dao said.

He added that around 700 people were mobilised overnight to help rescue workers at the site, where at least 28 people were injured.

State media reported that many of the injured were recovering at a local hospital, with some in critical condition.

It was not immediately clear why the scaffolding had collapsed but an investigation would be launched, said Dao.

According to local officials, the industrial complex is owned by Taiwanese group Formosa Plastics.

State media also said the construction project had been sub-contracted to a local labour supply company, with investment from Samsung C&T, a subsidiary of South Korean giant Samsung.

Formosa Plastics has been building a large steel complex in the Vung Ang industrial zone in Ha Tinh.

The eight-billion-dollar site was the target of anti-Chinese riots last May after Beijing deployed an oil rig in waters that Vietnam claims.

Formosa's Ha Tinh complex was looted, vandalized and partially burned down by rioters, leaving at least two Chinese workers dead and more than 100 others -- both Chinese and Vietnamese -- injured.

The project recently came under fire in Vietnam's state-controlled media for violating local labor laws by employing too many Chinese workers.

Deadly accidents are common at construction sites in Vietnam, where labor and safety regulations are sometimes ignored.