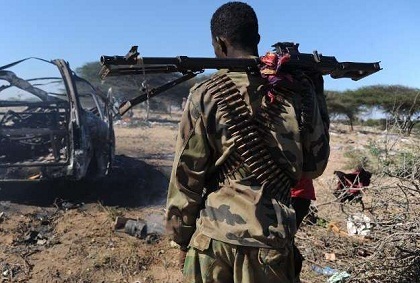 Uganda said Thursday it was boosting security over threats by Somalia's Shebab militants, hours after the U.S. embassy in Kampala warned its citizens of a possible imminent terror attack.

In an emergency warning issued late Wednesday, the U.S. mission in Kampala said it had "received information of possible terrorist threats to locations where Westerners, including U.S. citizens, congregate in Kampala, and that an attack may take place soon."

Ugandan defense spokesman Paddy Ankunda said the warning was "absolutely" linked to the Al-Qaida-linked Islamists, who have carried out major attacks in Kampala in the past.

"We've always known there's a threat and we've warned the public," he said, adding the militants appeared to have "have identified vulnerable points" as possible targets and that security had been stepped up in response to the threat.

Uganda is a key contributor to the African Union's AMISOM force battling the Shebab inside Somalia.

Ankunda insisted the threat was "low level", although a Western diplomatic source also described it as "serious" and "based on concrete information".

"Out of an abundance of caution, the U.S. mission has canceled some non-essential events scheduled at local hotels in the coming days," the U.S. embassy warning said, telling US citizens they "should expect increased security sweeps and delays when entering or exiting hotel areas."

The U.S. embassy in Kampala last issued an emergency warning in September 2014. Ugandan and Western security sources later revealed they had intercepted a transfer of explosive suicide vests by suspected Shebab members.

U.S. officials said at the time that the militants were determined to avenge the killing of their leader Ahmed Abdi Godane in a U.S. airstrike carried out earlier that month.

In 2010 the Shebab carried out twin bombings in Kampala targeting a restaurant and a club where football fans were watching the World Cup final between the Netherlands and Spain, killing 76 people in the region's worst attacks in more than a decade.

The Islamists were also behind the September 2013 attack on the Westgate shopping mall in neighboring Kenya's capital Nairobi which left at least 67 dead, and recently issued a call for fresh attacks against such locations.

The U.S. has continued to strike the militants from the air, and last week announced it had also killed a senior Shebab figure, Adan Garar, who was linked to the planning of the Westgate mall attack.