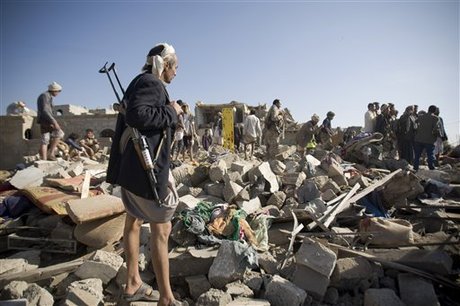 Saudi air strikes on Shiite rebels in Yemen triggered a furious reaction from regional rival Iran on Thursday, with top officials warning that military action could spill into other countries.

The bombing of the Huthi rebels, who are said to be backed by Iran, came after days in which Yemen was said to be facing civil war.

Saudi Arabia said it had launched the bombing raids to reinstate what it called the legitimate government of President Abedrabbo Mansour Hadi, who has been holed up in main southern city Aden since fleeing the rebel-controlled capital Sanaa last month.

"Military action from outside of Yemen against its territorial integrity and its people will have no other result than more bloodshed and more deaths," he told the Iranian-owned Al-Alam television channel.

"We have always warned countries from the region and the West to be careful and not enter shortsighted games and not go in the same direction as al-Qaida and Daesh," he added, using the Arabic acronym for the Islamic State group.

The comments from Zarif, who is in the Swiss city Lausanne for talks with U.S. Secretary of State John Kerry on Iran's controversial nuclear program, echoed condemnation of the Saudi-led strikes by officials in Tehran.

"This aggression will have no result except to spread terrorism and extremism, and increase insecurity throughout the region," she added in a statement, calling for an immediate halt to the strikes.

"The fact that Saudi Arabia has fanned the flames of a new war in the region shows its carelessness," he said, in comments carried by the Fars news agency.

"The smoke of this fire will go into the eyes of Saudi Arabia as war is never limited to one place only.

"We hope this military operation will be halted immediately and the Yemen problem solved through political means."

The Huthis and their allies within the armed forces had been closing in on Hadi's last bastion Aden.

Their advance raised fears in Saudi Arabia that the Shiite minority rebels would seize control of the whole of its Sunni-majority neighbour and take it into the orbit of Shiite Iran.

"America, which leads the fire mongering in the region, has supported this act and no doubt Saudi Arabia and some countries in the Arab cooperation council would not get involved without America's permission," he said.

"Having imposed long years of crisis in Iraq, Syria and Afghanistan, America has in practice started another crisis and massacre on the Islamic world and this act is strongly condemned," he added.

Later on Thursday, Iranian President Hassan Rouhani condemned Saudi Arabia's military intervention in Yemen and urged all countries in the region to stay out of their neighbor’s internal affairs.

"Interference by foreign militaries is very dangerous and deepens the crisis," Rouhani said, during a phone call with French President Francois Hollande.

He insisted the "solution to Yemen's problems is not military," the presidency said.

During a separate telephone conversation with British Prime Minister David Cameron, Rouhani referred to "this morning's military aggression and condemned all military intervention in the internal affairs of independent nations," his website said.

...but Iran aiding ASSad and bombing Syria is totally fine...

Did you see Iran carrying out airstrikes in Syria?
Saudi has been helping al qaeda and Hadi in Yemen for years now, Iran backing Houthis was on the same level, but now Saudi has escalated the situation with this war of aggression. Who knows how far this will go?

How do you know who is flying ASSad's planes and how does that make a difference anyways? They are defending ASSad's barrel bombs and have forces on the ground in Syria. The fact remains that Iran is fighting in Syria to defend ASSad so why is it that they can do that but Saudi can't fight in Yemen?

It will go as far as total war in the region. Yemen is now a total war zone just like Syria and Iraq.

by the way where's your proof that "Saudi was arming qaeda"? Where did Ali ABduallah Saleh (the current supporter of Houthis) go to get treated when he was bombed? Iran???

Same ones they've been aiding in Syria & Iraq. First they were so called moderates, later on they became Nusra ISIS. End of story

iran will do nothing, it never does.

Don't be too sure justin.

proof Mystic, proof that Saudi armed qaeda in Yemen? Iran has already been on record (at the very least) defending the terrorist houthis.

mowaten has made it clear on numerous occasions he is not Lebanese (Arab) instead he is iranian (farsi), so don't be surprised by his stances on this matter. The guy is true to himself and the values he believes in; an Iranian Khomeini empire with dahyeh as its capital.

Empty worder, Good day, KSA, have a campaign against terrorist in its country, and there had been so many incidents of in the news between them but either you decided to ignore or hate is blinding most probably.

Saudis do not represent Arabs, they represent the US and Israel as their faithful puppets. It is as an Arab that I feel ashamed of them.

Please excuse the pro Iran idiots they are waiting for news reports from almanar, alalam and other bogus media outlets in order for them to receive their talking points.

The KSA helped the legitimate government of Yemen even under Saleh while Iran only helps the shia. The same behavior can be seen in Lebanon

I simply cannot cope with the influx of yemeni houthis. We are building a staging holding area and the queue is 10 miles long already.

@mowaten
who cares? screw them both and I hope this war will widen so as the tensions will start moving from our area to theirs

iran arming and training these houthis is normal? but arab intervention is not accepted!

they are crazy these iranian!

The houthi coup is not sectarian? LOL

ya ashtah don't bother. This poor guy says Pakistan is not an Arab country but forgets his Iran is not Arab country also and he sees nothing wrong with its 50,000 troops in Syria and Iraq. They were born that way and their loyalty is to Iran.

What is your problem exactly Southern of iran? Countries are looking after their own way to get protected from Iranian expansion.

Iran has no business interfering in Yemen's internal affairs by supporting and arming a minority loyal only to its wilayat al faqih. The official government and the president of Yemen asked for this Arab intervention and so be it. Yemen cannot fall into the hands of the iranians because it will signal the end of the Arab world.

Iran's megalomania has to stop. Their crazy dream of an Islamic empire is lighting up a regional war.
All Arab countries have risen up to the challenge, including Iran's neighbour, Pakistan (that has a nuclear bomb).
Mwanwhile, the US is fighting alongside Iran against IS in Iraq and providing logistical support to Saudi against the Houthis.

I thought Iran will become a reasonable regional power, after the Nuclear deal, but it seems they are at the peak of their arrogance.

Don't distort everything here, it's KSA escalating the situation, not Iran.

How is ksa escalating and houthis attacking the palace of the elected president not a problem? the iranian/auni/houthi arrogance is flabbergasting!

eh mowaten eh, and houthis being armed and supported by Iran was what...a walk in the park?

sure ya iraní, KSA bombed the presidential palace, put a bounty on the president's head, shot and killed demonstrators, arrested the prime minister, tortured students.

mowaten wants us to believe his iranian backed houthis advance and take over of Sanaa and the north and now Aden is not an escalation by armed iranian thugs.

is that your final attempt at distorting the truth and sounding intelligent?

mowaten, it is better if you use your most common screen name. No need to make fake accounts because we all know it is you. Your character comes shining through:)

DID Iran Islamic Republic think that Arabic countries will sit and watch all capitals fall for it's Empire? Really? Or they know very well that their actions are provoking and there would be a problem?

Iran take one. GOOD job Egypt, KSA for comming together on yemen issue.

Ii distresses us Mr ayatollanman to inform you that your islamic revolution export buisness seems to have hit a snag. you overestimated the solidity of your procurement and you supply chain, your quality stock is running low and the current available merchandise is of much lower value than the previous stock.

34 minutes ago Abou Faour on the Dima daycare in Hayy al-Sellom: It was ordered shut. Its employees prevented Health Ministry inspectors from entering, ordering them to consult with political parties before coming to it.

and these "political" parties are.... hmmmm...... the "resistance" or could it be the Lebanese Forces? But, hey they support the state and strengthening its institutions through resistance.

Takes a whole coalition to stand against one single Ansarallah power, already they are glorious. They will drag as many to their deaths as they can, good job.

This coalition is a powerful message to Iran. Now you have 10 countries that are willing to use their military powers to counter Iranian expansionism.
Yemen it seems is just the beginning.
The 10 countries include one with nuclear weapons and a substantial military that is on Iran's borders.

Prior to 2003, Saddam's Iraq was the only buffer. 12 years after Saddam's fall, this 10 country coalition is a much more powerful and efficient way of checking Iranian attempts at regional hegemony, imposing a regional balance of power.

20 minutes ago Hizbullah: We strongly condemn the Saudi-American aggression against the brotherly Yemeni people, its national army and its vital facilities.

it seems and according to hizbullah bombing of the presidential palace, shelling of the official TV station in Sanaa, bombing the airports in Sanaa and Aden does not constitute aggression against the people of Yemen and its "vital" facilities.

samy from what I can see, he is the one under the rubble

hehehe! seriously ice-man we miss you:)

Mystic by your definition ISIS are supreme over Houthis as the whole world is bombing them...

I also did not know the huthis are in possession of more than 600 tanks and almost the entirety of the Yemeni air force.

More funny how Hadi screamed for help and the Saudis came immediately. No it is not the same as ISIS because the same Gulf countries sponsors them, all the Ansarallah have is their revolutionairy spirit which I am sure well help them succeed, they are going to fight it out to the end. It is an existential war for them.

12 minutes ago Egypt said its air force and navy are participating in the Saudi-led intervention against Huthi rebels in Yemen.