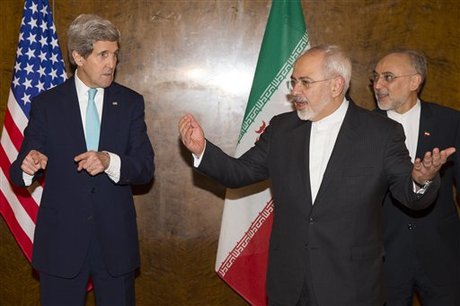 Iran's president Thursday appealed to global leaders including Barack Obama as negotiators raced against the clock to agree the outlines of a deal that puts an Iranian nuclear bomb out of reach.

Hassan Rouhani wrote to the American president, U.S. officials confirmed, as well as to the leaders of the five other powers heading efforts to resolve the 12-year standoff over Iran's nuclear program.

The content of the letters was not known. But Rouhani, whose 2013 election led to the current diplomatic push, also phoned the leaders of Russia, China, Britain and France, his office said.

"We are acting in the national and international interest and we should not lose this exceptional opportunity," Hassan Rouhani told British Prime Minister David Cameron by phone, the presidency said.

"Hope was expressed for success at the new round of talks in Lausanne," the Kremlin said after Rouhani spoke with President Vladimir Putin, while noting with "satisfaction the progress" made.

Francois Hollande, "insisting on Iran's legitimate right to use peaceful nuclear power, insisted on the need to work towards a lasting, robust and verifiable agreement," the French presidency said.

Highlighting the difficulties of talks that resumed in Switzerland Thursday between U.S. Secretary of State John Kerry and his Iranian counterpart, Rouhani also said Iran wants all sanctions lifted.

"The peaceful character of (Iran's) nuclear activities and the necessity to annul all the unjust sanctions can lead us to a final deal," Rouhani's office quoted him as telling Cameron.

The six powers negotiating with Iran -- the United States, China, Russia, Britain, France and Germany --  are however insisting that sanctions will only be suspended, not lifted, to enable them to be quickly put back in place if Tehran violates the deal.

Cameron "emphasized the importance of Iran showing flexibility on the outstanding issues in order for a deal to be reached," Downing Street said afterwards.

Kerry's talks in Lausanne with Foreign Minister Mohammad Javad Zarif and officials from the powers are aimed at agreeing the outlines of a nuclear deal by March 31 after two missed deadlines in 2014.

The two men met for more than four hours on Thursday, and their political directors resumed talks later in the evening.

"It's going well, we're working, we're meeting," Kerry said, pursued by reporters as he walked late Thursday through the streets of Lausanne.

A comprehensive deal, meant to be finalized by June 30, would see Iran downsize its nuclear program to ensure that any covert dash for an atomic weapon would be all but impossible.

Kerry is under severe pressure from the U.S. Congress to return from Lausanne with something concrete but it is unclear how detailed any "framework" accord will be, or even whether it will be a written document.

Both Iran and France, whose hawkish Foreign Minister Laurent Fabius plans to join the talks on Saturday, have criticized the two-step process, with France's U.S. ambassador calling it a "bad tactic."

"We very much believe that we can get this done by (March) 31," a senior State Department official said however.

"We can see a path forward here to get to an agreement, we can see what that path might look like," the official told reporters, cautioning however that this "doesn't mean we'll get there".

Iran's nuclear chief Ali Akbar Salehi told AFP in an interview in Lausanne that he was "on the whole optimistic" about the talks.

But he warned "there are those who have an interest in more troubles and not dealing with this question have not been inactive. They are trying to make sure there is no deal."

There were concerns however that a crisis in Yemen, where Saudi Arabia Wednesday launched air strikes against Shiite rebels who have seized control of the capital, could sour the atmosphere in Lausanne.

A State Department spokesman, Jeff Rathke, confirmed: "Secretary Kerry did briefly raise Yemen with his Iranian counterpart. But let me stress, this was not and is not the focus of the talks."

And another U.S. official insisted the air strikes would have "no impact" on the nuclear talks.