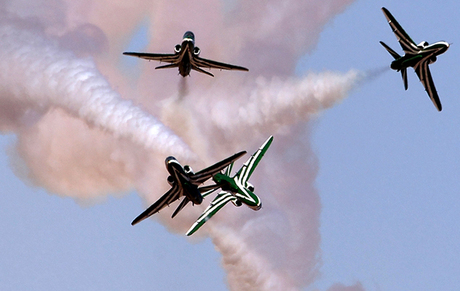 Saudi Arabia has the best equipped armed forces in the Gulf region, while counting on its Western partners to guarantee its security, the International Institute for Strategic Studies says.

Some 16,000 personnel are committed to air defenses, 2,500 responsible for strategic missiles and 100,000 man the National Guard, according to the IISS Military Balance, 2015.

The kingdom also has 24,500 paramilitary forces.

The Saudi armed forces have close ties with foreign armies, particularly the United States, Britain and France which gives them access to training and equipment.

The Saudi army regularly buys modern equipment, with the navy seeking to purchase submarines, according to the media.

Riyadh's appetite for arms, already high due to a perceived threat from Iran, is fed by regional instability, notably in Yemen, where Saudi Arabia on Thursday launched air strikes as part of a multinational coalition.

It is traditionally a customer of the U.S. and British arms industries, although Riyadh has also sealed contracts with France and Germany for its navy and has bought Eurofighter jets.

Its air force is equipped with 313 fighter jets, including F-15s, Tornados and Eurofighter Typhoons, as well as helicopters.

The National Guard is an autonomous force under its own ministry and plays a role both in internal security and conventional defense.

Mainly a mechanized force, it includes a large, tribal-based militia.

Modernization plans include orders for AT missiles, wheeled AFVs and CAESAR artillery. It is forming its own air wing with confirmed orders for U.S.-built AH6i, Apache and Black Hawk helicopters.