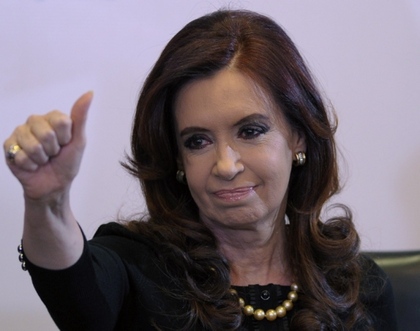 An Argentine appeals court on Thursday upheld the decision to dismiss a case against President Cristina Kirchner on accusations that she shielded Iranian officials from prosecution over a 1994 Jewish center bombing.

In a 2-1 decision, the court rejected an appeal from prosecutors who sought to revive the case against Kirchner being brought by their late colleague Alberto Nisman before he mysteriously died on the eve of congressional hearings where he was due to present his explosive allegations.

Nisman had accused Iran of ordering the bombing at the Argentine Jewish Mutual Association, a long-unsolved attack that killed 85 people, the deadliest in Argentina's history.

He alleged Iranian officials ordered the bombing via Lebanon's Hizbullah, a claim the government in Tehran denies.

He later concluded that a 2013 deal between Argentina and Iran for the suspects to be investigated by a joint commission was a conspiracy designed to ensure they would never be brought to justice.

In January he filed a report accusing Kirchner, Foreign Minister Hector Timerman and other figures close to the government of protecting high-ranking Iranian officials, including former president Akbar Hashemi Rafsanjani, in exchange for oil and trade benefits.

Four days later, on January 18, the prosecutor was found dead in his bathroom with a bullet through the head.

Since his death, initially labeled a suicide, suspicion has fallen on Kirchner's government of orchestrating his murder.

The president, who took office in 2007 and steps down in December, has suggested the prosecutor was manipulated by disgruntled former intelligence agents who then killed him to smear her.

After his death, a team of prosecutors appointed to take over the case formally revived Nisman's accusations, which Kirchner's government denies.

In a scathing ruling on February 26, Judge Rafecas ruled the prosecution had failed to provide sufficient evidence that any crime was committed by Kirchner.

"It is clear that none of the alleged crimes presented by (lead prosecutor Gerardo) Pollicita in his petition to the court are demonstrated in the least," he said.

He roundly rejected the prosecution's allegations that Kirchner sought to have an Interpol wanted notice for the Iranian suspects annulled, which the international police body's director at the time, Ronald Noble, denies.

Thursday's appeals court ruling upheld the lower court's reasoning, again finding that there was no evidence any crime had been committed.

A separate inquiry has been opened into Nisman's death.

Earlier this month, his ex-wife, federal judge Sandra Arroyo Salgado, said the forensic experts hired by the family had found that Nisman was murdered.