In Yemen, U.S. Gambles on Saudis as Sectarian War Looms 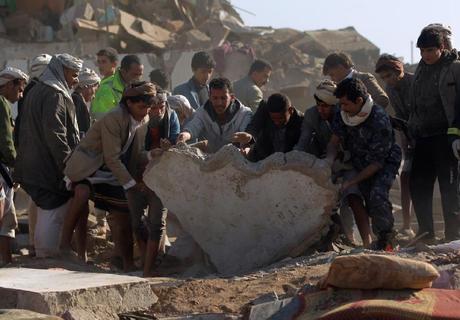 As the United States backs a Saudi-led intervention in Yemen, Washington runs the risk of undercutting its diplomacy with Iran and becoming embroiled in a regional sectarian conflict running from Aleppo to Sanaa.

Despite the risks, and with negotiations on Tehran's nuclear program at a crucial moment, President Barack Obama swiftly endorsed air strikes by a coalition of Gulf countries against Iranian-backed Huthi rebels in Yemen on Wednesday.

U.S. officials said American promises of intelligence and logistical support could include refueling tankers, early warning radar planes and spy drones for the Saudis and their allies.

"It's definitely on the table and being discussed," a defense official told Agence France Presse.

But officials said the U.S. role would remain "limited" and insisted there would be no direct action by American aircraft or troops deployed to join the fight on the ground.

"The premise of this is that this will be a Saudi-led operation," a military officer said.

The decision to lend help to Sunni states in the Gulf could push the United States deeper into a widening sectarian conflict across the Middle East, in which it finds itself in an often contradictory position.

In Iraq, U.S. fighter jets and Iranian artillery are taking aim at the same adversary -- the Islamic State group, which both governments see as a serious threat that must be confronted.

The indirect collaboration between the Americans and the Iranians in Iraq has dismayed the Saudis and other Sunni states, who view the Shiite regime in Tehran as a dangerous rival.

And the US diplomatic drive to cut a deal with Iran on its nuclear program is even more worrying for Sunni Arab countries, who have warned that Tehran will circumvent any agreement.

In Syria, however, the U.S. and Iran have ended up on opposite sides of that five-year-old conflict. Tehran has thrown its full weight behind the Damascus regime while Washington has ruled out any future role for President Bashar al-Assad.

U.S. officials also have been frustrated with some Gulf allies in recent years over allegations those states allowed money and volunteers to flow to Islamist extremists in Syria.

The State Department said Thursday there was no inconsistency in U.S. policy and that the delicate nuclear talks with Iran in Lausanne had not been disrupted by Yemen's proxy war.

"I've been in touch with our team on the ground in Switzerland, and our sense is that it hasn't had an impact," spokesman Jeff Rathke told reporters.

"There's no contradiction, and we have made clear throughout the process of the nuclear negotiations with Iran that we have serious concerns about Iranian behavior in a number of areas . . .," he said.

Iranian President Hassan Rouhani said the Saudi-led strikes in Yemen amounted to "military aggression" and "condemned all military intervention in the internal affairs of independent nations".

The Obama administration had a much different response in 2011 when the Saudis sent tanks across the causeway into Bahrain to help crush opposition from the Shiite majority there.

In that case, Washington appealed for restraint and called on the Gulf monarchies to respect the rights of all of Bahrain's citizens.

But the difference this time is that there is "too much at stake" in Yemen, said Seth Jones, a former adviser to U.S. special operations forces.

"It's one of the few places where we have a terrorist group on the ground that has the capabilities and an interest in attacking the U.S. homeland," said Jones, referring to al-Qaida's branch in Yemen.

The U.S. support for the Saudis and the Gulf countries was needed to try to bring stability to Yemen, as the current chaos was creating fertile ground for al-Qaida and potentially the IS group, said Jones, a fellow at the RAND Corporation think tank.

U.S. lawmakers from both parties backed the Saudi-led action, saying that the rebels' advance had to be checked to clear the way for an eventual political settlement and deprive al-Qaida of a sanctuary.

The Huthis are "dangerously close to sparking an all-out civil war" in Yemen and "given the horrors of Syria, such an outcome must be avoided at all costs," said Adam Schiff, a Democrat on the House intelligence committee.

While supporting the Saudi-led forces targeting the Huthi rebels, the United States needed to find a way to "not close the door to having them (Huthis) involved in  a negotiated settlement, " said Jon Alterman of the Center for Strategic and International Studies.

"This operation isn’t about completely defeating the Huthis," he said, but it did need to succeed in "preventing the Huthis from achieving a complete victory."

Without a genuine diplomatic effort to defuse the conflict, there was a real danger of an open-ended sectarian conflagration, he said.

"If the proxy war route is pursued, the conflict is likely to rage for years."