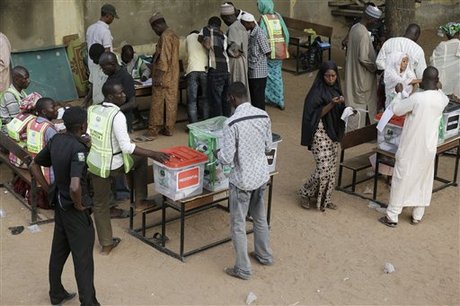 U.N. Secretary General Ban Ki-moon on Sunday congratulated Nigerians for holding "largely peaceful and orderly" elections despite Boko Haram attacks and urged them to continue to maintain a peaceful atmosphere.

Ban condemned attacks carried out by "Boko Haram and others who have attempted to disrupt" the presidential and parliamentary polls.

But he said Nigerians had shown resilience by pressing forward and turning out to vote "in the face of unjustifiable violence."

The U.N. chief called on all sides to continue to shun violence throughout the ongoing vote and the announcement of the results.

He said all voting complaints should be resolved through dispute resolution mechanisms.

"The successful conclusion of the electoral process will mark an important step forward in further consolidating democracy and the rule of law in Nigeria," Ban said in a statement.

Nigeria was holding a second day of voting after technical glitches hampered polling on Saturday.

Africa's most populous country was holding one of its closest elections in history, pitting President Goodluck Jonathan against former military ruler Muhammadu Buhari.

Boko Haram carried out attacks on three polling stations and on two areas in Gombe state in the northeast, leaving at least seven dead.

On Sunday, Nigerian troops were battling scores of Boko Haram fighters outside the northeast city of Bauchi.