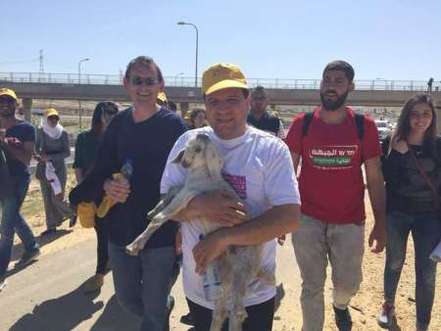 A four-day march led by Arab Israeli MPs in solidarity with Israel's impoverished Bedouin community wound up on Sunday at the Jewish state's presidency.

President Reuven Rivlin's office said Arab representatives delivered a report on the hardships faced by Bedouin villages to his wife, Nechama, as the head of state was in Singapore for the funeral of its founding father Lee Kuan Yew.

She would hand over the report to the president on his return.

Israel's top Arab MP, Ayman Odeh, began the 100-kilometer (60-mile) march on Thursday with several dozen supporters, saying their aim was to put a spotlight on the "human misery" faced by the Bedouin.

The march started in the Bedouin village of Wadi al-Naam near the southern Israeli city of Beersheba but not recognized by the authorities.

Odeh has pledged to secure formal recognition for more than 40 Bedouin villages which have no running water, are not connected to the electricity grid and lack basic infrastructure because of their unrecognized status.

He visited several of the largest villages on the march to Jerusalem.

Around 260,000 Bedouin live in Israel, more than half in unrecognized villages without utilities. Many live in extreme poverty.