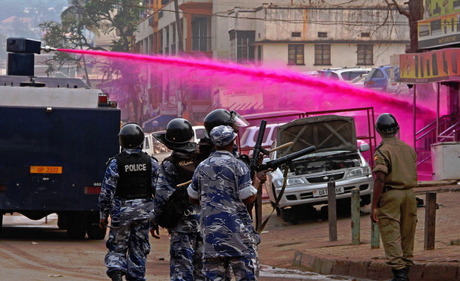 A key trial in Uganda of 13 men accused of taking part in Al-Shebab bombings that killed 76 people in 2010 was postponed Tuesday after the top prosecutor was shot dead.

Police on Tuesday vowed to catch the killers of Joan Kagezi, acting assistant director of public prosecution, who was murdered by men on a motorbike as she drove home with three of her children on Monday evening.

"Her death is a big loss to the country," Uganda's police chief Kale Kayihura said in a statement.

She was shot twice through the window of her car after stopping to buy fruit on the side of the road in a suburb of the capital Kampala.

"We call upon any member of the public who may have any information relating to the murder of Joan to give it to the police," Kayihura added.

"The murder of Joan Kagezi should only serve to increase our resolve to hunt down and bring to justice all those elements bent on disturbing the security and development of our country."

Kagezi had been due to appear in court Tuesday at the trial of 13 men accused of participating in the July 2010 bombings in Kampala which were claimed by Somalia's al-Qaida-affiliated Shebab militants.

"The criminals riding on a motorcycle... stopped next to the parked vehicle and shot her twice in the neck and shoulder, through the widow on the driver's side," Kayihura added.

"Her three children who were with her escaped unhurt."

Lawyers in court Tuesday were visibly emotional, saying they would meet later with judges to decide what will happen next with the trial, defence lawyer Yunusu Kasirivu said.

The suspects did not appear in court.

Kasirivu told reporters he was "very upset" at Kagezi's death, saying she had been a close colleague for several years.

"She was a wonderful lady -- very, very wonderful -- hardworking, polite," he said.

"When you clash in court she will smile back, when you want to shut her down...she will answer you politely."

Uganda and Kenya have contributed thousands of soldiers to the African Union Mission in Somalia (AMISOM), which was established to fight the Islamists and protect the internationally recognised government.

Al-Shebab continues to target countries in the region.

The 2010 suicide bombings targeted football fans watching the World Cup final at a restaurant and a rugby club in Kampala.

The trial of the accused -- -- seven Kenyans, five Ugandans and one Tanzanian -- began earlier this month at Uganda's High Court on a range of charges including terrorism, murder and membership of a terrorist organisation.

The July 2010 bombings were one of the deadliest attacks by the Shebab, who also carried out the 2013 assault on the Westgate Mall in Nairobi, Kenya, killing at least 67 people.