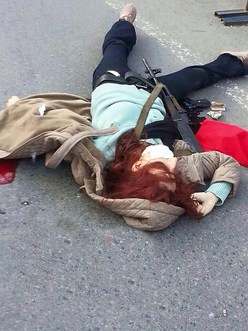 Turkish security forces Wednesday shot dead a female assailant armed with bombs and a gun after she and an accomplice sought to attack the police headquarters in Istanbul, reports said.

The male accomplice was injured but fled the scene of the clash, which came a day after a top prosecutor was killed in a hostage drama, Istanbul governor Vasip Sahin was quoted as saying by Turkish media.

One policeman was also lightly wounded in Wednesday's attack.

The male assailant, who fled after also being wounded by police in the shooting, was then arrested.

"A female terrorist, with bombs and a gun, was killed in the clash. The other assailant fled and was injured and one policeman was lightly injured," he added.

Television images showed the body of the female attacker sprawled on the tarmac on the road outside the police station in the Fatih district of central Istanbul after being shot dead.

Terrified passers-by crouched behind fences to avoid being caught in the crossfire.

Turkish television said that the attacker was carrying two bombs which were then made safe by disposal teams in controlled explosions.

Istanbul is on a high security alert after the hostage-taking, claimed by leftist militants, resulted in the death of prosecutor Mehmet Selim Kiraz.