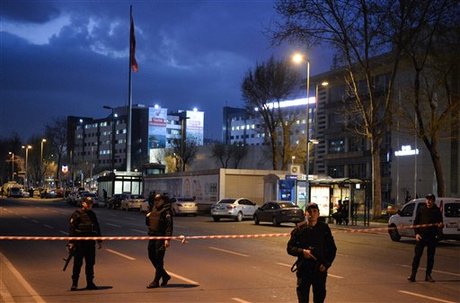 Turkish police on Thursday launched early morning raids against suspected members of an ultra-leftist group in Istanbul, after two deadly shootouts blamed on the militants that sent a wave of fear through the city.

At least 24 people were arrested in the raids in the Okmeydani district of Istanbul as dozens of police deployed in armored vehicles in the area, Turkish media said.

The raids came two days after a prosecutor was killed in Istanbul in a hostage-taking blamed on the far-left Revolutionary People's Liberation Party–Front (DHKP-C).

On Wednesday, a militant tried to storm the police headquarters in Istanbul. Police opened fire in response, killing the female assailant who was armed with grenades and guns.

Turkish media named the dead woman as Elif Sultan Kalsen, 28, saying she was a known member of the DHKP-C.

Initial reports said she had a male accomplice who escaped and was then arrested. However the CNN-Turk channel said Monday that the person was a passer-by who had been wounded in the crossfire.

The DHKP-C has claimed a string of attacks in Turkey in recent months, including an attempted grenade attack in January on police guarding the Dolmabahce palace in Istanbul that caused no serious casualties.

It also claimed a suicide attack in Istanbul later that month but, amid a bizarre sequence of events then withdrew the claim, saying it had made a mistake.

It had said at the time that the suicide bomber was Elif Sultan Kalsen but her parents then said the body was not hers. She has been missing ever since.

The authorities then indicated the bomber was a Russian woman from the Caucasus who had married an Islamist jihadist.

The DHKP-C says it wants revenge for the killing of Berkin Elvan, who died in March last year after spending 269 days in a coma due to injuries inflicted by police in mass anti-government protests in 2013.

The Istanbul prosecutor who was killed after being taken hostage by DHKP-C militants, Mehmet Selim Kiraz,was himself investigating the Elvan case.

Police had launched an operation to rescue him but Kiraz died shortly after arriving in hospital. Both the captors were killed but police sources told Turkish media that the hostage-takers had fired the fatal bullets at the prosecutor.

Elvan, who lived in Okmeydani, known as a hub for left-wing and Kurdish sympathizers, has become an icon for the far-left since his death.

The violence has come at a tense time in Turkey as the country prepares for legislative elections on June 7 where the Islamic-rooted ruling party is seeking a landslide victory to change the constitution.

"It is not clear whether or not disrupting the election campaign is a specific objective of DHKP-C," Marc Pierini, visiting scholar at Carnegie Europe, told AFP.

But he noted the attacks were coming at a time of a high degree of polarization in Turkey and amid "unresolved issues" including the cases of those killed in the 2013 protests.

After attending Kiraz's funeral Wednesday, Prime Minister Ahmet Davutoglu said the government was fighting an "evil alliance" and warned that disorder on the streets would not be tolerated.

"We won't fall into this trap, we won't sacrifice this country to them," he said.

In a sign of the tensions, Davutoglu said he had personally denied accreditation to the funeral for media organizations who had used an image of the prosecutor being held captive by the militants.

Turkish prosecutors on Thursday launched a probe into four newspapers who printed the image of the prosecutor with a gun to his head for disseminating "terrorist propaganda".

Tuesday's attack also coincided with the worst power cut in Turkey in 15 years but the authorities have vehemently denied any link between the two incidents.