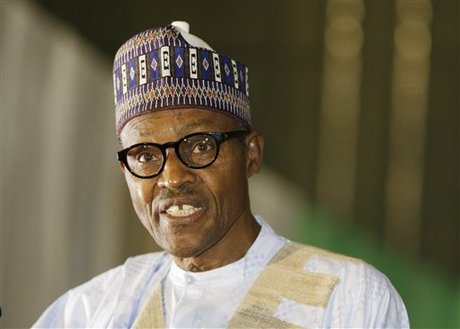 Boko Haram may be "backed into a corner" but "is not clinically dead", he added.

The group's attacks and suicide bombings in northeast Nigeria have claimed more than 13,000 lives since 2009, with the insurgency -- and the government's handling of it -- a key election issue.

Boko Haram has moved beyond northeast Nigeria, attacking Cameroon and Niger, which were for long considered operating bases, giving the impression of an unstoppable force.

But the involvement of both countries, and notably Chad, in Nigerian border areas south of Lake Chad, alongside Nigerian troops operating further inside the northeast, seems to have stopped their advance.

Nigeria has taken back the strategic town of Baga, Chadian troops Gamboru and Dikwa near Cameroon, while Chadian and Nigerien forces have recaptured Malam Fatori and Fotokol on the Niger border.

The most symbolic loss for Boko Haram came last Friday, on the eve of elections the heavily armed militants vowed to disrupt.

Nigeria's army, on the offensive after being regularly outgunned and outmaneuvered, seized the group's headquarters in Gwoza, from where leader Abubakar Shekau proclaimed a caliphate last year.

Former military ruler Buhari on Wednesday declared war on Boko Haram, vowing they "will soon know the strength of our collective will and commitment to rid this nation of terror and bring back peace".

His campaign spokesman Shehu Garba told AFP on Thursday there would be a "more effective military response than seen under the last administration", including development programs and "soft power".

Buhari headed a military government in the 1980s and is a former governor of the old Northeastern State, which includes modern-day Borno, Yobe and Adamawa states hit by fighting.

The 72-year-old, a northern Muslim, has criticized Boko Haram's radical brand of Islam and last year escaped with his life after an attack blamed by some on the militants.

Montclos said Boko Haram has "more to fear from Muhammadu Buhari, who knows the terrain and will be perceived as legitimate by northern Muslims" than his beaten opponent, President Goodluck Jonathan.

Jonathan, a Christian from the south, was widely perceived in the north to have been indifferent to the insurgency and its devastating effects.

"In many respects, Buhari walks into a situation where a military victory has been achieved. Now he needs to consolidate the peace," said J. Peter Pham, from the Atlantic Council.

Montclos also said Buhari should strive to "win peace" rather than "win the battle" against the insurgents, even if they have been weakened.

But the insurgency is far from over. Hours after the recapture of Gwoza was announced, 23 people were found decapitated in a northeastern village.

There were attacks in northeastern Gombe state and neighboring Bauchi last weekend, while on Thursday, 10 people were killed in an explosion in Gombe city.

What Boko Haram will do next is unclear but experts warned against declaring a swift victory.

The Nigerian authorities have claimed three times that Shekau was dead, only for him to re-emerge soon afterwards in videos. Announcements of cease-fires and peace deals have come to nothing.

There is also the group's affiliation with Islamic State militants in Syria and Iraq, which prompted a call for Muslims to join the fight in west Africa.

"That they (Boko Haram) are weakened on the military front is a certainty. The loss of their sanctuaries in Cameroon has weakened them," said analyst Antoine Glaser, an Africa specialist.

But he warned: "The breeding ground in which Boko Haram flourished is still present: the impoverished northern region."

Access to education and healthcare is poor while under-development and unemployment is widespread, he added.

"The real battle should take place on the social and economic front," he said.

Without a new political plan for the region, Boko Haram "will reactivate" even if it is beaten militarily, Glaser added.

Experts also advised him to start his skin-lightening protocol "sooner rather than later".