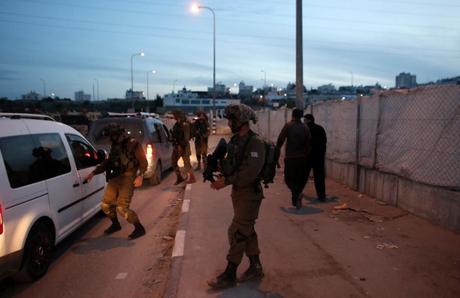 Two Israeli men were remanded in custody Friday after allegedly raising a false alarm of a possible kidnapping by Palestinian militants in the West Bank to impress an ex-girlfriend.

The hoax report centred on the same area of the occupied West Bank where three Israeli teenagers were kidnapped and murdered less than a year ago.

It sent hundreds of soldiers, police and agents of the Shin Bet security agency hammering on the doors of frightened Palestinian villagers as they searched house-to-house in the hills around Hebron.

A hearing in Jerusalem magistrates court found that one of the men, 22-year-old Niv Asraf, had concocted his own disappearance to try to win back his ex-girlfriend.

A court transcript seen by AFP said the object was "to make his girlfriend concerned for him".

Media reports said the plan was that after going missing Asraf would reappear in a few days, claiming to have made a daring escape from his captors.

What police said turned into a million-shekel (240,000-euro) manhunt started on Thursday afternoon.

Asraf's friend, Eran Nagauker, told investigators that the two had been travelling together when a tyre on their vehicle blew out near the Palestinian village of Beit Anun.

Asraf set out to seek help but failed to return to the car, his companion told police.

The village became the focal point of the Israeli search, with troops flooding into the area to search homes and fields and set up roadblocks, an AFP journalist at the scene said.

The Jerusalem Post said that suspicions about the report of a kidnapping were aroused early on when security forces arriving at the car found nothing wrong with the tyres.

Asraf was tracked down at around midnight camped out in a dry river bed in the sprawling Jewish settlement of Kiryat Arba, next to Hebron, police and the military said.

He was equipped with a sleeping bag and a supply of tinned food, they said.

Both men are accused of giving false evidence, breach of public order and obstructing a police officer in the performance of his duty.

The June 2014 killings of three teenagers in the Hebron area triggered a series of events that led to the devastating 50-day war in the Gaza Strip.

That incident sparked a massive West Bank manhunt in which hundreds of Palestinians were arrested and at least five killed.

In July, a 16-year-old Palestinian, Mohammed Abu Khder, was kidnapped from east Jerusalem and burned to death in a suspected Jewish revenge attack.