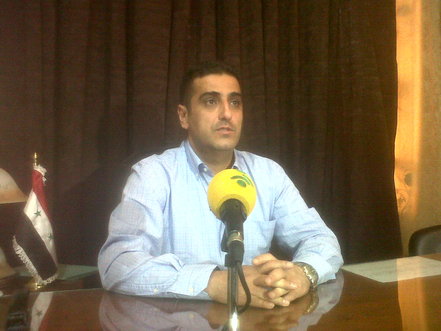 Syrian authorities on Tuesday arrested a member of the domestic "tolerated" opposition as he returned to the country from a rights meeting in Geneva, a monitor and an activist said.

"The opposition figure and human rights activist Saleh al-Nabwani was arrested on Tuesday on the Lebanese-Syrian border," said Rami Abdel Rahman, director of the Syrian Observatory for Human Rights.

Nabwani, of the Qameh movement, had been traveling back from Geneva via Beirut after taking part in a human rights workshop, the Britain-based monitor said.

The arrest was also confirmed by Haytham Manna, an opposition activist with the same movement.

Nabwani, 44, is also a founding member of the National Coordination Committee for Democratic Change (NCCDC), a leading domestic opposition movement.

Nabwani was arrested and subsequently released in 2013 while delivering humanitarian relief to internally displaced civilians in Sweida province, monitoring groups said at the time.

Before the Geneva workshop, Nabwani attended meetings in Dubai in preparation for a conference of opposition figures in Cairo expected in late April.

The National Coalition, Syria's internationally recognized opposition, is based in exile, but a small movement of domestic opposition activists tolerated by the regime remain in the country.

Among them is Louay Hussein, head of the Building the Syrian State movement, who is currently free on bail and under a travel ban after being jailed for three months over accusations he weakened national sentiment.

He is currently awaiting a verdict on his case in late April.

Earlier this year, U.N. human rights chief Zeid Ra'ad Al Hussein, urged the Syrian regime to release all activists, lawyers and other detainees they have been holding without due process.

After the scud, barrels, chemical, torture, rape, ethnic cleansing, force ejection of people airrades bomming, imprisonment without courts, using Hizbillah, lran as well as Isis to help its staying in power., after all this, Activist still believe they can go back safely? Something is wrong.