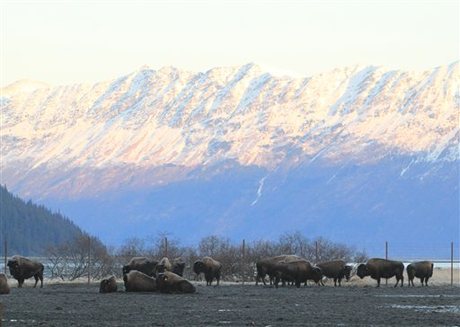 Frozen Arctic and sub-Arctic soil that thaws from global warming will add substantial amounts of carbon to the atmosphere in the form of greenhouse gases, accelerating climate change the rest of the century, but it won't come in a sudden burst, researchers say in a new paper.

A review by government and academic experts concludes that harmful carbon dioxide and methane generated by microbes digesting thawed plant and animal material will instead enter the atmosphere gradually. But it's a carbon source that shouldn't be ignored, said Dave McGuire, a senior researcher at the U.S. Geological Survey and a professor of ecology at the University of Alaska Fairbanks.

"The estimates that we came up in this synthesis suggest that throughout the rest of this century, it could be on the order of the magnitude of what tropical deforestation currently affects the global carbon cycle," McGuire said.

McGuire is co-lead author and one of 17 researchers who worked on a research paper with these conclusions that appeared this week in the journal Nature. The paper is an outcome of the Permafrost Carbon Network, a group of more than 200 scientists from 88 research institutions in 17 countries who for four years have studied changes in the Arctic. The other lead author is Ted Schuur of Northern Arizona University.

Most global warming is tied to the burning of fossil fuels. Tropical deforestation — the clearing of dense rainforest to make room for farms, to harvest timber or to create urban areas — is blamed for about one-tenth the warming brought on by burning fossil fuels.

That substantial amount is expected to be matched by the effects of melting permafrost, or permanently frozen ground, scientists said.

Researchers wanted to find out how much carbon is contained in permafrost, how fast it's likely to be released and in what form it will be released.

They also addressed some researchers' suggestions of a huge greenhouse gas release associated with warming.

"People have been sort of proposing that there's a potential for a 'permafrost bomb,' " McGuire said, a surge that could quickly cause trillions in economic damage to roads, buildings, runways and other infrastructure built on frozen ground.

"Our research indicates that's not likely," he said.

A gradual and prolonged release will give Arctic communities time to adapt. But the substantial amount of carbon released into the atmosphere should be important information for scientists forecasting future warming and policy-makers who set targets for reduction of fossil fuel consumption.

"If they decide to do that to meet some targets, and they don't take this into account, they will underestimate the amount of effort required to meet those targets," McGuire said.

Many unknowns remain, he said. An increase in forest fires could result in faster permafrost thaw. On the other hand, longer growing seasons could mean more vegetation and more absorption of carbon that could counter output from thawing permafrost, he said.