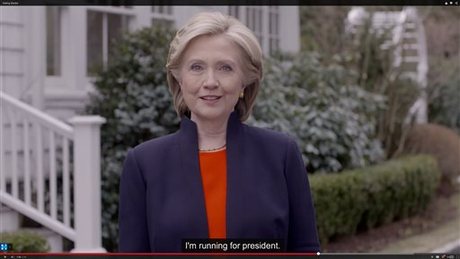 Hillary Clinton arrives in Iowa on Tuesday during an overland road trip to begin a series of low-key meetings with ordinary voters and set the tone for her campaign.

It is in Monticello, a small town of 4,000 inhabitants in the key Midwestern state that the former top U.S. diplomat will hold her first small roundtables with middle-class voters after crowding into a van traveling from New York.

Clinton finally announced her bid to join the race to succeed President Barack Obama and give Democrats a third-straight presidential term for the first time in more than half a century.

The announcement unleashed a fierce, highly-coordinated Republican attacks on her "failed policies of the past" and what they call an uneven performance at some of the highest levels of U.S. government.

The 2008 campaign veteran struck a note of humility this time with her pledge to champion "everyday Americans" -- a departure from her hard-as-nails approach when she lost her party's nomination to Obama seven years ago.

She traveled via a modest mini-van with a small team, rather than a private jet, with much of her itinerary shrouded in secrecy.

An agricultural state of a little more than three million residents, Iowa plays an outsized role in U.S. geography and political history.

It is the first electoral battleground for White House candidates, where voters make their preferences known before any other state in party primaries and caucuses.

The result in Iowa, while yielding only a few party delegates to the national Republican and Democratic conventions, helps set the tone of the campaign.

Clinton's first major rally and the speech that kicks off her campaign is not expected until May.

While Clinton aims to break the "glass ceiling" and become the nation's first female commander-in-chief, her Republican rivals want to reverse course from what will be eight years of Obama policies they say have made America weaker and economically stagnant.

Republican Senator Marco Rubio officially launched his presidential bid Monday, calling for new American leadership that is not "stuck in the 20th century."

Rubio, a 43-year-old Florida lawmaker and son of immigrants from Cuba who often casts his personal arc as the embodiment of the American Dream, presented the 2016 presidential election as "a generational choice about what kind of country we will be."

The remark, in a hometown speech at Miami's Freedom Tower that once processed Cuban immigrants into the United States, was a clear jab at his older rivals, notably Clinton, 67, and his fellow Republican and former mentor Jeb Bush, 62.

And should he win the election, Rubio would also have his own claim to history, as the nation's first Hispanic commander-in-chief.

"Just yesterday, a leader from yesterday began a campaign for president by promising to take us back to yesterday," he said as supporters booed at the mention of Clinton.

"But yesterday is over, and we are never going back."

Rubio has enjoyed a remarkable political rise since running for Senate as an underdog in 2010, when he was swept into Congress on a conservative Tea Party wave.

Rubio joins two other Republican first-term senators who are already running: Ted Cruz of Texas, who is also Cuban-American, and Libertarian-leaning Rand Paul from Kentucky.

Cruz in a statement welcomed his friend to the presidential rodeo, saying Rubio will help "elevate the debate for all of us."

Should Bush, a former governor and the son and brother of two presidents, enter the race as expected, his duel against fellow Floridian Rubio could be a compelling narrative of the Republican primary.

Rubio wants to take voters beyond the dynastic Bush-Clinton dynamic that has ruled national politics for much of the last three decades.

Youthful, charismatic and articulate on several issues, Rubio hopes to transcend the Republican Party's reputation for difficulty in connecting with young, Hispanic or African-American voters.

But he angered core conservatives two years ago when he helped craft a bipartisan immigration bill that would have provided pathways to citizenship for millions of undocumented workers, a plan he backed away from after it died in the House of Representatives.

Rubio's kickoff notably came just days after Obama shook hands with Cuban strongman Raul Castro at a regional summit, the visual symbol of a detente to which Rubio is fiercely opposed.