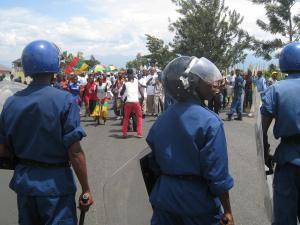 Burundian farmer Emmanuel Minani knew it was time to leave when the gang who had terrified him for months told him directly they would torch his house and kill him.

As elections in Burundi approach, thousands of people are fleeing into neighbouring Rwanda, fearing violence from the hands of the ruling party's youth wing, the Imbonerakure.

Minani, 44, crossed into southern Rwanda last week with his wife and four children, because of what he said were threats from the Imbonerakure ahead of elections in May and June.

"The Imbonerakure threatened to kill us because we are not members of the ruling party, and we refused to vote for the president," said Minani, a supporter of the opposition Uprona party, Burundi's main Tutsi political group.

"At night, they (the Imbonerakure) patrol the area and threatened to burn our house," he added, surrounded by a group of terrified Burundians who also fled across the border.

Now the group of exhausted refugees shelter in dilapidated buildings, a former army training camp being turned into a refugee reception centre at Gashora, in Rwanda's southern region.

UN rights chief Zeid Ra'ad Al Hussein on Wednesday warned the "militia of the Imbonerakure" was "operating increasingly aggressively and with total impunity."

Minani, like scores of others with him in Gashora, came from just across the border from the province of Kirundo, half a day's walk away.

There are now more than 6,000 Burundians registered in Rwanda, with the number growing by hundreds every day, many of them Tutsi, as well as Twa people.

Burundi, a small landlocked nation in central Africa's Great Lakes region, emerged in 2006 from a brutal 13-year civil war, and the majority Hutu and minority Tutsi communities are still struggling to reconcile after decades of conflict.

It holds general elections in May to elect lawmakers before a June presidential poll.

Tensions have risen over incumbent President Pierre Nkurunziza's bid to seek a third term, despite the constitution stating a president can only be elected twice.

With the opposition and civil society groups mobilising, there are worries the country is on the brink of trouble once again.

Those who have fled say it is increasingly difficult to leave. When Minani first attempted to cross into Rwanda, the Imbonerakure blocked their way.

"They stole our goats and  forced us to go home," he said. Now, according to refugees, members of the youth league are positioned along the border to block it.

"The Imbonerakure have built camps in the bush at the border so that you can be monitored all the time," he added.

Refugees around him nodded in agreement as he described how those who were caught were often badly beaten.

The Imbonerakure have a fearsome reputation: in February, Human Rights Watch detailed how security forces and the Imbonerakure executed at least 47 rebels who had surrendered.

Members of the youth wing were said to have beaten to death those prisoners who were not shot, throwing others off a cliff and helping to hide bodies in mass graves.

The government rejected the allegations but set up a judicial commission of inquiry to investigate.

Opposition politicians and critics say the government is doing all it can to sideline political challengers ahead of the elections, including arrests, harassment and a clampdown on free speech.

Those who come from Burundi now arrive carrying little if anything so as not to attract attention when they make the break to cross the border.

"I left my goats and my chickens, I did not even take spare clothes," said Gerard Macumi, 25, now living in a rundown house, where rain pours through the gaping holes in its tin roof.

"When it rains at night we have to stand up or we are soaked," he said.

Yet Macumi says he does not regret leaving, describing an atmosphere of fear and intimidation to those who oppose the CNDD-FDD, the ruling party of the Imbonerakure.

"The Imbonerakure puts cassava leaves on the windows or doors of the houses of members of the CNDD-FDD," he said, with those who do not show the symbol singled out and threatened.

"When you have problems with Imbonerakure, you can't complain to anyone because it is the government that sends them," he charged. "They are stronger than the army."

Macumi fled after hearing broadcasts on opposition radio claim weapons were being distributed to the Imbonerakure to prepare for "war" should the president be blocked from a third term in power.

"One day, in a bar, one of them told me that if the president gave him the signal, he will clean his rifle with the blood of Tutsi."

"There is a lack of food and shelter here, but I will never go back to Burundi," she said. "Even if we are forced to go, I prefer to struggle and to die here."