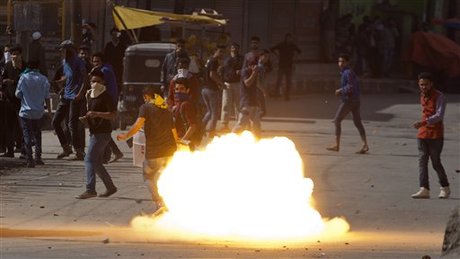 Demonstrators set fire to an Indian flag and hurled rocks at riot police in Kashmir's largest city Friday as protests over the arrest of a top separatist leader turned violent.

Hundreds took to the streets of Srinagar, capital of Indian-administered Kashmir, to vent their anger at Masarat Alam Bhat's detention after he fronted a rally earlier in the week where followers waved Pakistani flags.

The violence erupted soon after worshipers emerged from Friday prayer services in the city's mosques, chanting pro-Pakistan slogans and "we want freedom", according to an AFP reporter on the scene.

The police tried to disperse the crowds by firing tear gas and then wielding their batons.

At least 16 people were injured during the clashes, including three policemen, an officer who was not authorized to speak to the media told AFP on condition of anonymity.

Bhat, who was released in March after several years behind bars, was arrested early Friday at his home in Srinagar, a day after police registered a case against him.

"He (Bhat) has been arrested after a case for unlawful activity was registered against him," K. Rajendra, the state's director general of police, told AFP.

The case stems from a rally on Wednesday organized to welcome another separatist leader, Syed Ali Geelani, on his return to Srinagar from New Delhi where he had spent the last three months receiving medical care.

Although that rally passed off peacefully, television images of Bhat leading a chorus of his supporters chanting "jeeve jeeve Pakistan (long live Pakistan)" and other slogans against India's rule of the disputed region triggered widespread condemnation from politicians and the media.

Anti-India sentiment runs deep across Kashmir, a picturesque Himalayan region which is India's only Muslim-majority state.

Bhat rose to prominence in 2010 when he organized a series of mass protests before being detained without charge for four years under controversial public safety legislation.

Kashmir has been rocked by violent protests this week after the brother of a top rebel leader was killed by the army near the town of Tral in the south of the Kashmir valley.

Kashmir is divided between India and Pakistan since the two countries gained independence in 1947. Both claim the territory in its entirety.

Although several rebel groups have been fighting Indian forces since 1989 for independence of a merger of the territory with Pakistan, street protests have become the principle mode of opposition to Indian rule.