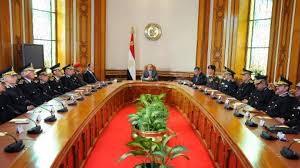 Arab League military chiefs decided Wednesday to form a panel to examine all aspects of building a region-wide military force aimed at combating jihadists, including the Islamic State (IS) group.

The bloc agreed in March to set up the force, with members given four months to decide on its composition, precise rules of engagement and budget.

Top brass gathered at League headquarters in Cairo decided "to set up a high-ranking committee under the supervision of army chiefs to examine all aspects of this issue," said a statement at the end of their meeting.

"The panel will examine the mechanisms and budget needed to set up the joint Arab military force, and also the legal framework."

It was not immediately clear when the committee will actually be formed, but the statement said it would meet in the next few weeks.

Egyptian President Abdel Fattah al-Sisi has been pushing for the creation of the force since February, after a video emerged showing IS executing a group of Coptic Christians in neighboring Libya, prompting retaliatory air strikes by Cairo.

"The creation of a joint Arab force in no way aims to form a new alliance or army hostile to any country, but a force to fight terrorism and maintain security, peace and stability in the region," Arabi said at the start of Wednesday's meeting.

Hegazy said there was a need to "fight terrorism," adding that the force might intervene in internal conflicts.

"We cannot ignore internal conflicts and the growth of terrorist organizations in an Arab country, and it is wrong to think that these conflicts have no direct or indirect repercussions in other Arab countries," he said.

Egypt, the most populous Arab country, appears set to become the backbone of the force.

Cairo sees it as imperative to intervene in Libya against the local branch of IS that is gaining ground in the country.

IS has carried out widespread atrocities in the region and won the support of several other jihadist organizations.

On Sunday it released a video purportedly showing the execution of about 30 Ethiopian Christians captured in Libya.

Southern of Iran, you are not a terrorist, so why all the fear? ♡ only those who wish to play with Arabic affairs and try to topple governments and set their retarfed agends to be affected. YOU are clearly a risistance than you will be let to do whatever you like without any army or security forces asking you what are you doing. BRING your friends from Yemen to be barred here bring your revolutionary guards here all welcome.. mmmua.