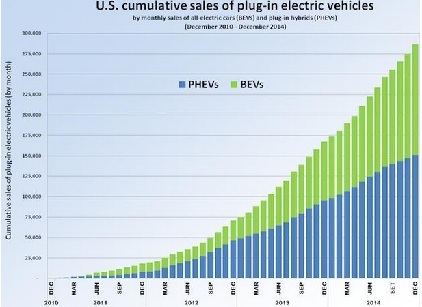 Electric vehicle demand in the past five years has soared in this country. The same is true worldwide. By the end of 2014, more than 700,000 total plug-in vehicles had been sold worldwide (plug-in hybrids and pure battery electrics), up from about 400,000 at the end of 2013. As of 2015, dozens of models of electric cars and vans are available for purchase, mostly in Europe, the United States, Japan, and China.

A major reason for the rapid jump in EV sales is the rapid drop in the cost of their key component -– batteries. The energy stored in a battery is measured by kilowatt-hour (kWh). The more kWh stored, the further the car can go on one charge, so a key metric for battery economics is the cost per kWh. The lower the cost, the cheaper it is to build an electric car with a significant range.

In a major 2013 analysis, “Global EV Outlook: Understanding the Electric Vehicle Landscape to 2020,” the International Energy Agency estimated that electric vehicles would achieve cost parity with internal combustion engine vehicles when battery costs hit $300 per kWh of storage capacity. The analysis projected that would happen by 2020.

Yet a study last month in Nature Climate Change, “Rapidly falling costs of battery packs for electric vehicles” determined that “industry-wide cost estimates declined by approximately 14% annually between 2007 and 2014, from above US$1,000 per kWh to around US$410 per kWh.” The study, by Björn Nykvist and Måns Nilsson, also looked at battery electric vehicle (BEV) leaders, like Nissan’s LEAF and Tesla’s model S. They found, “the cost of battery packs used by market-leading BEV manufacturers are even lower, at US$300 per kWh.”

So the best manufacturers have already reached the battery price needed for cost parity with conventional cars.

Last year, UBS, a leading Investment bank, found “the 3-year total cost of ownership (TCO) of a Tesla S model is similar to that of a comparable petrol combustion engine car such as an Audi A7,” in places like Germany.

Even more revolutionary, UBS projects that “the payback time for unsubsidised investment in electric vehicles plus rooftop solar plus battery storage will be as low as 6-8 years by 2020.” Of course, oil prices have been dropping, too (as have solar prices). The battery study from last month found that prices would need to drop under $250 per kWh for EVs to become competitive. Further, it concluded:

“If costs reach as low as $150 per kilowatt hour this means that electric vehicles will probably move beyond niche applications and begin to penetrate the market more widely, leading to a potential paradigm shift in vehicle technology.”

Can electric car batteries hit that price point? The study projects that costs will fall to some $230 per kilowatt hour in the 2017 to 2018 timeframe. Tesla Motors and Panasonic have started building a massive $5 billion plant capable of producing half a million battery packs (plus extra batteries for stationary applications) a year. It is expected to be completed in 2017. Tesla and Panasonic estimate this “Gigafactory” with 6,500 workers will lead to a 30 percent reduction in cost, which the recent Nature Climate Change study said is “a trajectory close to the trends projected in this paper.”

It may well be that $150 per kWh can be hit around 2020 without a major battery breakthrough but simply with continuing improvements in manufacturing, economies of scale, and general learning by industry. This seems especially likely if China continues its explosive growth in EV sales.