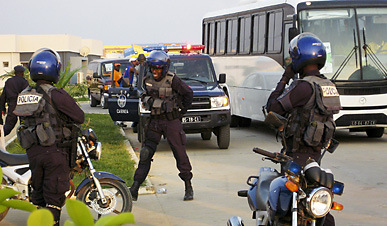 Angola's opposition party Unita said on Thursday that more than 1,000 people had been killed in a police operation against a Christian sect, though the authorities insisted only 22 people died.

According to official figures, 13 civilians and nine policemen died two weeks ago when police raided a village in the central region of Huambo to arrest Julino Kalupeteca, the leader of the Seventh Day Light of the World Church.

Clashes broke out as the sect's members unsuccessfully tried to thwart the arrest of their leader.

Neither death toll has been independently verified and no witness accounts have emerged of the incident. The area has since been cordoned off.

"In relation to the killing of nine national police that was blamed on members of the sect, (we) register charges of persecution, abduction and manhunt against defenseless citizens," Unita said in statement.

"Noted in particular was the disappearance of many citizens and the murder of more than 1,000 people, inside and outside the area to which members of parliament have been denied access."

Police deny the huge casualty figure and have challenged Unita to back up its claims with evidence.

"We used deterrents such as rubber bullets and tear gas because we knew that the area was inhabited," local police commander Elias Livulo was quoted as saying by the government daily Jornal de Angola.

The sect, which predicts the end of the world in 2015 and encourages its followers to live in seclusion, is a dissident branch of the Seventh Day Adventist Church with 3,700 followers in Angola, according to local news agency ANGOP.

"We have been denied access to the area and we have no news of the leader of the sect, who has been detained without legal assistance," said Salvador Freire, of the rights action group Maos Livres.

"If we do not get results, we will bring the case to the African Commission on Human Rights and the United Nations to shed light on this tragedy."

While the Angolan state officially recognizes 83 Christian churches, nearly 1,200 other religious organizations exist, including many cults, according to the culture ministry.

The country, which has a population of around 24 million, is majority Catholic, a legacy of Portuguese colonization.

But evangelical churches are gaining followers, leading to the building of large cathedrals.