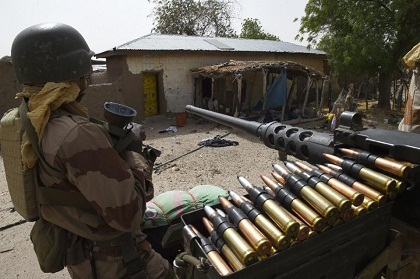 Niger authorities have urged people living on islands in Lake Chad to leave to avoid new attacks by Boko Haram, after an assault by the Islamists last weekend left at least 74 dead.

The weekend attack was the country's heaviest loss since it joined a regional offensive against the militants, and saw authorities declare three days of mourning from Wednesday.

"The governor of Diffa invites people living on the islands in Lake Chad to rejoin the mainland," a statement Thursday said, citing security reasons.

"Measures will be taken to ensure their safety and resettlement," the statement added.

Niger has several islands in Lake Chad, a vast body of water between it, Nigeria, Cameroon and Chad, the regular site of deadly Boko Haram raids.

Niger lost at least 46 soldiers and 28 civilians in the Boko Haram attack on the island of Karamga Saturday.

Interior Minister Hassoumi Massaoudou said Wednesday that "156 terrorists" were also killed in the assault on an army base on the island, and that 32 troops were missing.

He said Niger had since retaken control of Karamga.

Niger, along with Chad, Cameroon and Nigeria, has recently launched a joint offensive to end Boko Haram's six-year insurgency, which has claimed 13,000 lives and caused about 1.5 million people to flee their homes.