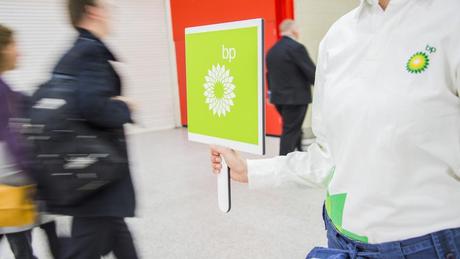 BP's shareholders overwhelmingly supported a resolution on Thursday that would force the company to disclose some of its climate change-related risks. The shareholder vote was extraordinarily lopsided, with about 98% of shareholders approving the resolution, which had the backing of BP's chairman, Carl-Henric Svanberg.

The embrace of the climate change resolution is being called a watershed event in the history of climate-related shareholder resolutions, which investors large and small have been pursuing since 1999 to try to encourage oil, coal and gas companies to inform shareholders of their climate change-related risks and shift their investments into renewable sources of energy.

Previously, companies from Exxon to BP have spurned such resolutions.

The risks that global warming poses to the business models of companies like BP are clearer now than ever before. Scientists are warning that in order to avoid the worst consequences of global warming, much of big oil's fuel reserves, which these companies value so highly, would need to be left in the ground, rather than burned to create energy.

The BP vote and support of a similar resolution at Shell show that climate change has moved beyond the world of socially-responsible investing and into the mainstream, says Shanna Cleveland, a senior manager at Ceres, which advocates for more sustainable business practices and open disclosure of climate-related risks to investors, among other goals.

In an interview with Mashable, Cleveland called the BP vote: “A sea change in the type of support and voting that we’ve ever seen in a climate-related resolution.”

The resolution was filed by a coalition of shareowners in the U.S. and the UK, including the California Public Employees' Retirement System (CalPERS). It asks BP to report on the risks and opportunities associated with climate change through routine annual disclosures, including ongoing emissions management at company facilities, preparation for the effects of global warming and low carbon research and development strategies and investments.

“What happened today I would classify it as historic, not only passing but getting that number of votes,” Cleveland said.

On Friday, a separate coalition of investors coordinated through Ceres is planning to ask the SEC to strengthen disclosure requirements from U.S.-based fossil fuel companies.

In his annual speech to investors, BP's Svanberg made the unusual move of addressing climate change head-on and at length, which is almost unheard of at a company primarily invested in oil and gas, rather than fast-growing renewables like wind and solar.

"... We need to play our role in the action on climate change," Svanberg said. "Climate change is a clear challenge for the world."

Svanberg said more progress needs to be made in growing energy access and the economy while limiting increases in emissions.

"The world has made encouraging headway in disconnecting these historic trends through energy efficiency and low carbon initiatives," he said. "But, the increase is still in excess of what scientists and governments say is needed to keep the temperature rise within 2 degrees," he said, making a reference to the globally agreed-upon target of limiting global warming to under 2 degrees Celsius, or 3.6 degrees Fahrenheit, relative to preindustrial levels.

According to the U.N., the world has already used about 65% of its "carbon budget" that is compatible with the 2-degree goal, with just about 35% left. In order to keep the 2-degree target viable, global emissions of greenhouse gases, such as carbon dioxide, would need to peak within a decade, and decline to zero or even negative numbers by the year 2100.

A report by the group Fossil Free Indexes found that as of 2015, the reserves of the top 200 fossil fuel companies contain almost five times the amount of carbon allowed in the U.N. Intergovernmental Panel on Climate Change's carbon budget.

The possibility that BP, and other companies like it, is pouring money into finding even more supplies of what will soon be stranded assets may have prompted the uptick in shareholder support for climate risk disclosure.

Svanberg cited disagreements among global leaders about the policy solutions to global warming, but said the company's role is to share "our knowledge and do our part in encouraging an informed debate."

He did not, however, sing the praises of renewable energy and announce a shift in BP's investments away from oil and gas. This is despite the extraordinarily rapid growth of wind and solar in the U.S. and elsewhere, and the fact that renewables are now at parity or even cost less in some markets than fossil fuel-powered energy.

Some leading energy analysts have been especially bullish about the growth of renewables when compared to fossil fuels, which are the core of BP's business. For example, the founder of Bloomberg New Energy Finance pronounced the era of fossil fuel dominance essentially over in a prominent speech on Tuesday.

Instead, Svanberg emphasized the global picture, saying, "Renewables are the fastest growing source of energy but from a very low base. We expect a growth from 2% of all energy today to maybe 8% by 2035."

"So, as far as we can see, to balance the energy demands of the world and the need to address the growth in emissions requires a thoughtful approach," he said. "And from our projections, to meet these demands, fossil fuels will be part of a balanced, sustainable energy mix for many decades to come."

His agenda calls for BP to advocate that policymakers put a price on carbon, which would direct investments toward low-carbon technologies, push a transition from coal to gas, and focus more on energy efficiency.

"We need to support lower carbon technologies until they reach the scale needed to compete," he said.

According to The Guardian, which is pursuing an advocacy campaign of its own to encourage divestment from fossil fuel companies like BP, Svanberg said BP would not set its own greenhouse gas targets, and criticized the divestment movement as a poor strategy.