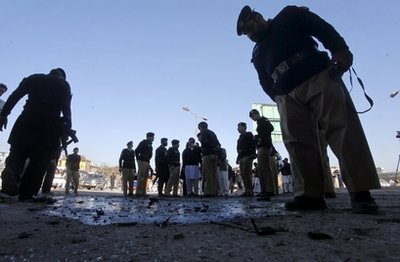 A bomb explosion on Monday killed at least six people including a pro-government tribal elder in a restive Pakistani region near the Afghan border, officials said.

The attack took place in the village of Barkamar, part of the Bajaur tribal district where the military has been battling Taliban and other militants linked to Al-Qaeda.

"An improvised explosive device planted along the roadside went off as the vehicle of a local pro-government tribal elder, Malik Muhammad Jan, passed by it, leaving him and five others dead," senior district official Fayyaz-ul-Haq Sherpao told Agence France Presse.

He said Malik Muhammad Jan was a leading member of a local peace committee, which in Pakistan work to apprehend militants operating in their areas.

No one has so far claimed responsibility for the attack, but the Taliban have often targeted pro-government tribal elders in the area.

Bajaur is one of seven semi-autonomous tribal districts along Pakistan's mountainous western border. They became a hotbed of Islamist militants following the U.S.-led invasion of Afghanistan in 2001.

The army has intensified its offensive since the Taliban's massacre of 153 people, 134 of them children, in a school in the northwestern city of Peshawar in December.