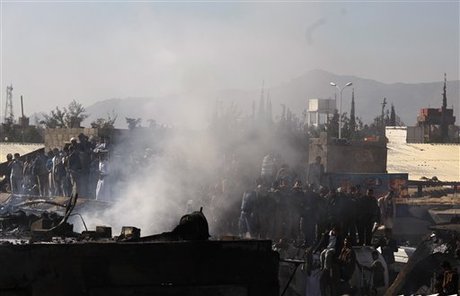 A Saudi-set humanitarian truce is poised to take effect in Yemen late Tuesday, after 24 hours of intensive bombing by a military coalition led by the kingdom targeting Iran-backed rebels.

Explosions at an arms depot in the capital hit by Saudi-led coalition strikes since Monday killed at least 69 people and wounded 250, mostly civilians, an official said.

The blasts at Mount Noqum, on the eastern outskirts of the rebel-held capital, lasted until midday Tuesday, when a fresh wave of strikes hit the depot, an AFP correspondent said.

She called on "all parties to keep cultural heritage out of the conflict."

Quiet returned to Sanaa as the newly appointed U.N. envoy to Yemen, Ismail Ould Cheikh Ahmed, arrived for talks with the Shiite Huthi rebels, ahead of other meetings this week, possibly in Iran.

"We are not ready to announce a date for talks but that remains the goal," UN spokesman Stephane Dujarric said, adding that "the fact that he got into Sanaa and is meeting with the Huthis today is a sign in the right direction."

Tensions between Sunni-dominated Saudi Arabia and Shiite Iran have soared since the launch of the aerial campaign on March 26.

The Huthis have promised to respond "positively" to the planned truce, and allied troops loyal to ousted president Ali Abdullah Saleh have accepted the proposed ceasefire.

The truce would be the first since the Riyadh-led alliance launched the air war aimed at restoring the crumbling authority of exiled President Abedrabbo Mansour Hadi.

The planned ceasefire has strong backing from Washington, which has said it could be extended.

But doubts have been cast on the initiative.

"There might be a ceasefire but it won't end the conflict," said a Western diplomatic source. "I'd be surprised if it was honored across Yemen. There will still be skirmishes going on."

The U.N. has expressed deep concern about the civilian death toll from the Saudi-led bombing as well as the humanitarian impact of an air and sea blockade imposed by the coalition.

It says more than 1,500 people have died in the conflict since late March.

The Huthis, who hail from Yemen's mountainous north near the border with Saudi Arabia, overran Sanaa in September and extended their control to other regions.

Hadi fled to Riyadh as the rebels closed in on his refuge in the main southern city of Aden, where clashes between his opponents and supporters have shown no sign of relenting.

Clashes raged in the southern provinces of Abyan, Shabwa and Daleh, as well as Jawf farther north, residents said.

Bloody clashes were also reported in the central province of Baida, as well as coalition air strikes on a Huthi-held camp in Marib province, east of Sanaa.

Air raids rocked the Huthi stronghold province of Saada late Tuesday ahead of the truce, according to witnesses.

The Red Cross said a longer ceasefire was needed.

"We hope the truce would last longer, and become permanent. And we hope all sides respect it," spokesman Adnan Hizam said, lamenting a "catastrophic" humanitarian situation.

Human Rights Watch warned the Huthis had intensified recruitment of children in violation of international law.

Commanders of the rebels and other groups "should stop using children or risk prosecution for war crimes," HRW said.

It said Islamist and tribal militias as well as al-Qaida were also recruiting children.

Al-Qaida has exploited the growing turmoil to consolidate its grip on Yemen's southeastern province of Hadramawt.

A provincial commander, Maamoun Hatem who headed al-Qaida in the central province of Ibb, was among four militants killed Monday in an apparent U.S. drone attack in Hadramawt, an official said.

Meanwhile, the coalition denied rebel claims they had shot down a Moroccan F-16 warplane, which crashed in Yemen at the weekend.

"We are definitely sure it wasn't shot down," said Brigadier General Ahmed al-Assiri.

As always, you have this ability of pinpointing the truth.

the_toar is trolling as a huthi woman hahaha!!!

roar told phoenix he is not posting because he has a life, walaw;))

Funny how in minutes he chooses to respond to you Eagle under his normal pen name. Kids....

Flame, pick a discussion for a change instead of doing the traditional Kizb thing and disturb the process whatever it may seem to be. Oh yes you can curse me now and call me names in response but I believe the greater challenge would be to try and debate something for a change....if you can that is if not then simply meet with your normal expectations and call us Yidds and the tyrannic slants...