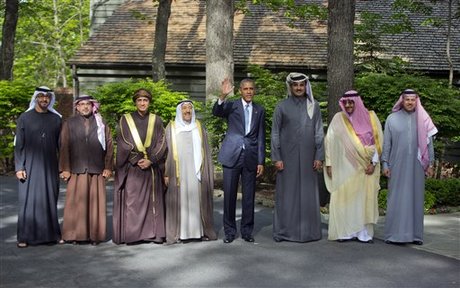 Gulf nations were reassured by a pledge from U.S. President Barack Obama that Washington would stand by them despite its overtures to Iran, a senior Arab official said Friday.

Obama had "renewed the U.S. commitment to the region, to the Gulf states" during a high-profile summit at his presidential retreat of Camp David in Maryland, Aluwaisheg told reporters.

"The security of the GCC states is vital to the interests of the United States," the Arab diplomat said.

And he insisted "the U.S. is ready now to go even a little bit further," saying that already strong ties had now been elevated to that of a "strategic relationship."

And he vowed the United States was prepared to help "deter and confront an external threat to any GCC state's territorial integrity."

In a communique issued at the end of the summit, the U.S. and Gulf nations denounced Iran's destabilizing activities in the region.

Gulf nations have been fearful that if a deal is reached with Iran by a June 30 it will only embolden the Shiite country blamed for propping up Syrian President Bashar Assad during the four-year civil war and for backing Huthi rebels in Yemen who have forced the president to flee to Riyadh.

They are concerned too that a deal will lead to a widening U.S. rapprochement with Iran -- even though the two countries have not had formal ties for more than three decades.

But Obama also managed to allay these concerns, Aluwaisheg said.

"There is no abandoning of the GCC, there is no pivot to Iran."

And he offered that "if Iran moderates its behavior... then we all will pivot to Iran, but it's in the hands of the Iranian regime."