Obama Says U.S. Not Losing against IS, Ramadi Fall a 'Tactical Setback' 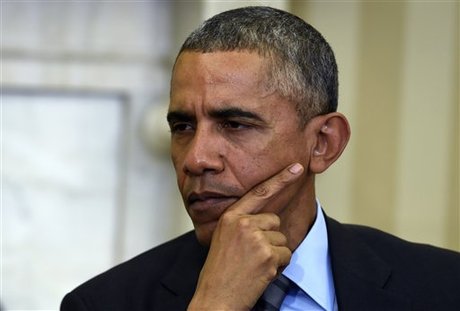 U.S. President Barack Obama has described the loss of key Iraqi territory to Islamic State as a tactical setback, while insisting the war against the jihadist group is not being lost.

"I don't think we're losing," Obama said in an interview with news magazine The Atlantic published Thursday, days after the Iraqi city of Ramadi was overrun.

"There's no doubt there was a tactical setback, although Ramadi had been vulnerable for a very long time," he said.

Since August 2014, on Obama's orders, a U.S.-led coalition has hit more than 6,000 targets in Iraq and Syria with airstrikes, with the aim of degrading the Islamic State group.

Obama has refused to return U.S. combat troops to Iraq, following a long brutal war after the overthrow of Saddam Hussein.

But the rout in Ramadi has called into question US strategy and the credibility of Iraq's central government.

Obama blamed it on a lack of training and reinforcement of Iraq's own security forces.

"They have been there essentially for a year without sufficient reinforcements," he said.

"But it is indicative that the training of Iraqi security forces, the fortifications, the command-and-control systems are not happening fast enough in Anbar, in the Sunni parts of the country."

Ramadi is in Iraq's minority Sunni heartland, a short drive from the capital Baghdad.

Even with sustained U.S. airpower, many observers are skeptical the Iraqi army can win the war against the well trained and highly motivated Islamic State group.

Both Washington and Baghdad have reluctantly begun to advocate the use of ethnic and religious paramilitaries to bolster the fight.

The United States has pushed Iraq's central government to enlist Sunni tribesmen in Ramadi's Anbar province, something the Shiite-led government has been reluctant to do.

"There's no doubt that in the Sunni area we’re going to have to ramp up not just training, but also commitment, and we better get Sunni tribes more activated than they currently have been."

yes...nobody is loosing against Isis, except the Cristhians in the region!!