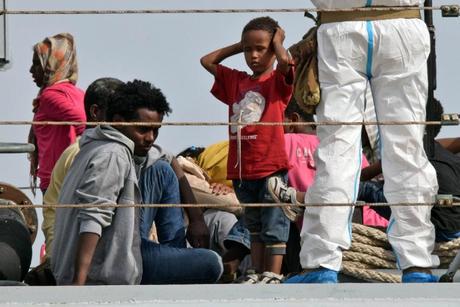 The EU on Wednesday asked its member states to admit 40,000 asylum seekers from Syria and Eritrea landing in Italy and Greece, which have been overstretched by an influx of migrants.

The emergency proposal, which comes atop another one to resettle in member states some 20,000 refugees who are outside Europe, is in response to a surge in migrants making the dangerous crossing over the Mediterranean.

Both Rome and Athens, which are struggling with the wave of migrants, appealed to the 26 other EU states to share the burden.

"We... have a proposal for an emergency mechanism to relocate 40,000 asylum seekers to other European (member) states," EU migration commissioner Dimitris Avramopoulos told a press conference.

"Syrians and Eritreans will be relocated from Italy and Greece to other European Union member states over a period of two years," he said.

The measure concerns people arriving in those countries after April 15 this year, the commissioner said.

The proposal suggests migrants be distributed according to four criteria: gross national product, population, unemployment and the number of asylum requests already registered in the country.

Repeating an earlier proposal, Avramopoulos said the European Union is also asking member states to admit 20,000 people from third countries who have "a clear need for international protection".

"They will be resettled from countries outside Europe to European Union member states."

However, EU states Britain, Ireland and Denmark can opt out of both schemes under existing EU treaties, according to EU officials.

Avramopoulos insisted that the European Commission, the executive arm of the 28-nation EU, was not proposing a quota system for distributing people.

Many member states, which are under pressure from anti-immigrant parties during tough economic times, have strongly objected to quotas.

"It's up to each member to decide how many refugees they will grant refugee status (to)," he added.

"If countries want to relocate or settle more, they can, but we want to insure minimum solidarity," Avramopoulos said.

However, EU sources said, countries must first admit the 40,000 asylum seekers based on a "distribution key," which looks like a quota.

It opens a breach in the Dublin rules that require the country where asylum seekers first land to take them in.

The task is bound to be particularly difficult because Britain, Hungary, the Baltic states, the Czech Republic and Poland oppose mandatory relocation based on a redistribution "key" system.

"The proposal is not perfect, but it amounts to an enormous step forward, because it introduces the principle of solidarity," EU foreign policy chief Federica Mogherini said Tuesday.

"We will have to build a consensus" around the relocation proposal for asylum seekers "so that interior ministers can approve it" by a simple majority when they meet June 16 in Luxembourg, the former Italian foreign minister added.

Avramopoulos spoke of an "emergency mechanism" as Brussels fears the arrival of a wave of migrants and asylum seekers during the summer in Italy, Greece and Malta.

Around half a million migrants could attempt to cross the Mediterranean, the U.N. International Maritime Organization warned in late April.

U.N. chief Ban Ki-moon was in Brussels for talks Wednesday with commission head Jean-Claude Juncker after urging Europe to do more to help migrants.

EU nations already approved plans May 18 for an unprecedented naval mission starting next month to fight human traffickers responsible for a flood of migrants crossing the Mediterranean from Libya.

The scheme backed by foreign and defense ministers in Brussels will involve European warships and surveillance aircraft gathering intelligence and then raiding boats to crack down on people smugglers.

But the EU is still waiting for a U.N. resolution that will allow it to destroy boats that belong to people smugglers in Libyan waters, where political turmoil has created a safe harbor for traffickers.