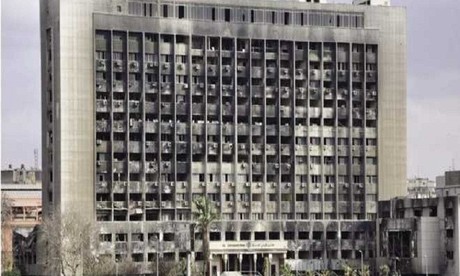 Egypt on Sunday began tearing down the headquarters of the once-dominant party of ex-president Hosni Mubarak that was torched during the 2011 uprising that toppled him.

An adjacent 14-story tower that once housed offices of state-run organizations was also being dismantled.

In early 2011, angry protesters demanding the ouster of Mubarak had ransacked and set fire to the NDP headquarters and the adjacent tower -- seen as symbols of his autocratic rule.

Last month the government approved plans to demolish the buildings.

Both buildings are located close to the famed building of the Egyptian Museum of Antiquities near Cairo's iconic Tahrir Square -- epicenter of the anti-Mubarak revolt.

"I was requested to demolish the buildings, including the foundations, in three months. After we finish this, we will start the second phase to convert it into a park," said contractor Ragab Hafez.

He said about 200 workers would be involved in the operation.

Mubarak's NDP party was ordered officially dissolved in 2011 but a court in July lifted a ban on former members running in elections.

A court in November dropped murder charges against Mubarak, 87, in connection with the deaths of some 800 protesters during the uprising.

He was however sentenced to three years in prison in a separate case on corruption charges along with his two sons, Alaa and Gamal.