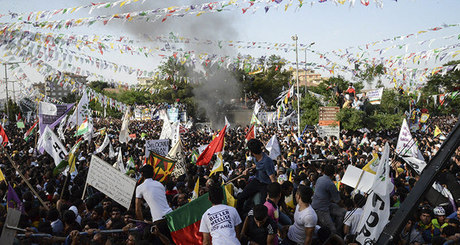 The violence broke out in Diyarbakir on Tuesday when Aytac Baran, the leader of a charity linked to the Kurdish Islamist political party Huda Par, was shot dead, prompting a gunfight that left three more people dead and 11 injured.

Baran's supporters have accused backers of the People's Democratic Party (HDP) of being behind the attack but the claim has been vehemently denied.

The Diyarbakir governor's office said in a statement that 17 suspects were detained over the violence.

At least three journalists who were covering the clashes were injured.

The governor's office said police had seized scores of weapons, Kalashnikovs and bullets in raids on 27 addresses in Diyarbakir.

HDP leader Selahattin Demirtas accused the government and President Tayyip Erdogan on Wednesday of seeking to undermine his party's strong showing in Sunday's election by keeping silent over the unrest.

"Some people are taking steps to drag the country into a civil war but the prime minister and president are nowhere to be seen," Demirtas told reporters in Ankara.

"We are burying a body every day, but they are all silent."

HDP managed to easily pass the 10 percent threshold needed to win seats in parliament, and resoundingly defeated the ruling Justice and Development Party (AKP) in the Kurdish-dominated southeast.

The AKP must now seek a coalition partner for the first time in 13 years, but the HDP has ruled out joining the government.

Violence frequently breaks out between Huda-Par, known as the political arm of Turkish Hezbollah, and HDP members, who are seen by critics as close to the outlawed Kurdistan Workers' Party (PKK).

Turkish Hezbollah has no link with the Lebanese Shiite group of the same name.

According to his lawyer, Baran had been threatened by the PKK shortly before his assassination, but the group denied it was behind the attack, saying it was a provocation aimed at intimidating Kurds.

The violence came after three people were killed and dozens more wounded in an attack on an HDP rally in Diyarbakir last week, in the final days of the election campaign.

Despite a peace process to end a decades-long insurgency by the PKK, southeastern Turkey remains volatile.