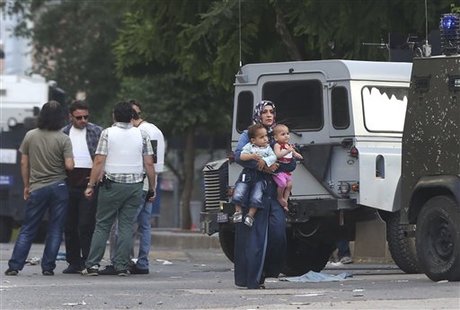 The death toll from an attack on a rally of Turkey's pro-Kurdish People's Democratic Party (HDP) rose to four on Saturday, when a 65-year-old died from his wounds, the Dogan news agency said.

The June 5 attack on an HDP pre-election rally in the southeastern city of Diyarbakir, caused by a bomb stuffed with ball bearings, came two days ahead of the June 7 legislative elections in which the party scored a major breakthrough.

Severely wounded Ali Turkman, 65, succumbed to his injuries in a Diyarbakir hospital, the Dogan news agency said. More than 100 more were also wounded.

The toll given by Dogan does not include a fifth fatality, Ramazan Yildiz, 16, who fell from trees at the rally in circumstances that remain unclear.

Prime Minister Ahmet Davutoglu said one suspect had been arrested over the attack and was being checked for links to militant groups but has given no further details.

The HDP won 13 percent of the vote and 80 seats in last weekend's election, a result hailed as a historic breakthrough for a Kurdish political force in Turkey.

The HDP's leader Selahattin Demirtas this week blamed the attack on Islamic State (IS) jihadists who have taken swathes of Iraq and Syria on the other side of the Turkish border.

Demirtas said on Friday he feared pro-IS formations had created "cells" inside Turkey and were waiting for orders to cause "chaos" in the country.