Bill Clinton: Hillary the 'Rock' of the Family 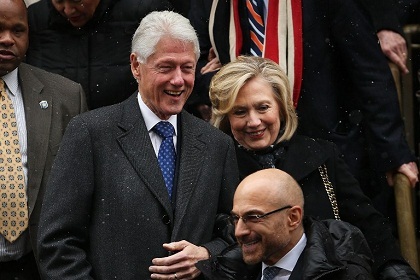 Bill Clinton said in an interview aired Sunday that he admires his wife Hillary as she makes her second run for the White House, defending her integrity in the face of attacks.

On Saturday, Clinton held the first major rally of her campaign to become America's first woman president, on home turf in New York.

"I trust her with my life, and have on more than one occasion," the former U.S. president told CNN's "State of the Union" in the interview taped earlier this week.

The pair married when they were both in their late 20s, a time the former president recalled as being "plagued by self-doubt," adding that he had few bearings because his father died before he was born.

"Whenever I had trouble, she was the rock in our family," he added about his wife.

When Bill Clinton narrowly lost his re-election campaign for the post of governor of Arkansas in 1980, "she never blinked. She just said, 'hey, it will turn around. I believe in you,'" he recalled.

Clinton also defended his wife in the face of polls showing that most Americans say she is neither honest nor trustworthy.

Hillary Clinton's campaign, announced in April, has been clouded by criticism about her charitable work with the Clinton Foundation, paid speeches, private email accounts and her record as secretary of state.

"Anybody who is still really close to their best friend in grade school is by definition trustworthy. Unless they were robbing stores together at six or seven," Bill Clinton said.

"Anybody who has got the friends of their lifetime is trustworthy."

The Democratic leader, who was at the White House from 1993 to 2001, also recognized the strength of the Republican field opposing his wife's candidacy.

"And they're no dummies."

Yet he pilloried them for believing that "trickle-down economics works better than investment, and their convictions are so great that they're undeterred by evidence."