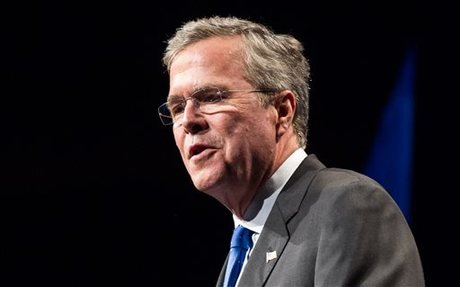 The campaign logo is ready, so is the big speech, and his message is taking shape: Jeb Bush is about to join the crowded Republican field running for president in 2016.

Bush, 62, has run a de facto race for six months, raising money and increasing his travels, including a trip this week to Europe.

On Sunday, his campaign released his logo. It reads "Jeb!" in big red letters on a white background, with 2016 in smaller blue lettering underneath the name.

"I think the transition to a candidacy will allow me to be more direct about my advocacy of the leadership skills necessary for the next president to fix a few things," Bush told CNN in an interview aired Sunday, a day before his planned announcement in Miami.

"And as a candidate," he added, "I'll be more specific on policy."

A Bush campaign video lists reforms he made while governor of Florida from 1999 to 2007.

"The barriers right now on people rising up is the great challenge of our time," Bush says in the video.

"My core beliefs start with the premise that the most vulnerable in our society should be in the front of the line, not in the back, and as governor I had a chance to act on that core belief."

Bush aims to break from the pack of potentially 15 or more Republican hopefuls by portraying himself as an experienced executive leader not tainted by Washington politics and the dysfunction that many Americans associate with politics as usual.

But evidence of Bush's struggle is apparent in Iowa, the state that votes first in the primaries and caucuses that determine the party nominees, and where he finished seventh among declared or potential candidates in a poll last month.

Nationally, Bush is bunched at the top of most polls, but he is not the dominant figure in the race that many had expected.

In a RealClearPolitics poll average, he leads with 11.3 percent. But six other Republicans are within just four percentage points, including Wisconsin Governor Scott Walker, who topped the Iowa poll.

Fellow Floridian and U.S. Senator Marco Rubio, 44, who has shot from the back of the pack to the front, has cast himself as one in a new generation of politicians who represent the Washington establishment.

For Bush, the political pedigree as son and brother of two former presidents could end up as either a blessing or a curse.

His last name guarantees him the highest visibility of any Republican candidate. But while U.S. media and polls anointed him his party's early frontrunner for 2016, he has not lived up to the hype.

Back in December, when he announced he was exploring a presidential bid, there were signs Bush would handily dominate the Republican competition.

There was talk, fueled by aides speaking privately to reporters and fundraisers, that the main pro-Bush outside spending group was on track to raise a historic $100 million by the end of June.

Bush waded into a quagmire last month when he repeatedly waffled over whether he would have authorized an invasion of Iraq.

The series of bungled on-air responses, while potentially damaging for Bush in their own right, highlighted what will likely be one of the candidate's distracting challenges: overcoming the legacy of his brother George W. Bush and his unpopular Iraq policy.

Amplifying the pre-campaign turbulence, Bush announced last week he was shuffling his team, reportedly naming operative Danny Diaz as his campaign manager instead of David Kochel, an Iowa strategist who was widely seen as preparing for the job.

"There are some real problems for Jeb," conservative columnist Erick Erickson wrote in TownHall.com.

He pointed to the many advisors Bush has scooped up in early months, in part to prevent them from joining rival candidates, as well as his name and his messaging struggles since leaving office.

Jeb Bush's Florida record has impressed many, but he left office eight years ago. And grassroots conservatives have expressed skepticism, saying he has not since put forward a compelling conservative message.

Two issues could keep core conservatives away: his support for comprehensive immigration reform, which places him to the left of virtually all Republicans in the field on the issue, and his backing of Common Core, a set of national education standards loathed by conservatives.