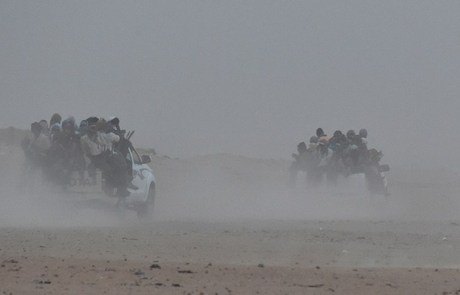 The bodies of 18 mainly west African migrants trying to reach Europe have been found in Niger in the Sahara desert, the International Organization for Migration said.

The 17 men and one woman are believed to have lost their way in a sandstorm after setting off from the desert town of Arlit, IOM said Sunday.

"They succumbed after having lost their route from Arlit, Niger to Algeria due to a sand storm," IOM Niger's mission chief said in a statement.

"And then the heat and lack of water did the rest."

The organization said the migrants were from Niger, Mali, Ivory Coast, Senegal, the Central African Republic, Liberia, and Guinea, with one reportedly from Algeria.

They are thought to have died on June 3, but their bodies were discovered over a week later.

While there has been much international focus on the flood of migrants and refugees attempting to cross the Mediterranean to reach Europe, the boat voyage is often just one step in a long and treacherous journey.

The discovery of the 18 bodies gives a rare glimpse of the hidden side of the migration tragedy.

The 18 bodies "highlights a feared but hitherto little-known danger too many migrants face long before they risk their lives at sea," IOM Director General William Lacy Swing said in a statement.

"The Sahara may be as deadly as the Mediterranean for this wave. All too tragically many of these deaths go unreported."

IOM estimates that some 100,000 people are likely to attempt the same journey across the Sahara this year alone.

Unlike on the Mediterranean, there are no rescue missions in the Sahara, and it remains unclear how many people die trying to cross the desert sand.

"We don't think this is an isolated case but without a systematic collection of information or without a rescue operation we will never know how many migrants could possibly be missing," Loprete said.

"We have to ask ourselves, how many people must die in the desert even before reaching the smugglers' boats in the Mediterranean?" he said.

So far this year, more than 100,000 people have cross the Mediterranean to Europe, while 1,865 others have died trying.

Thanks to increased efforts by Europe to patrol the water routes, nearly 50,000 people have been rescued since the beginning of the year in the waters between Libya's coast and Italy, IOM said.