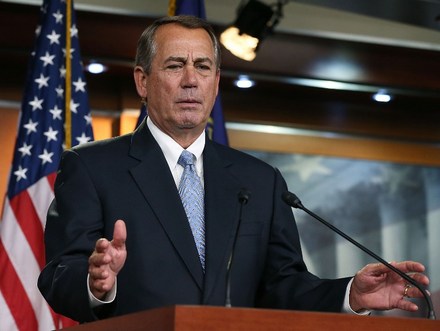 U.S. lawmakers voted Thursday to give President Barack Obama fast-track authority to negotiate a major trans-Pacific trade accord, moving it closer to his desk after a dramatic defeat last week.

Trade Promotion Authority (TPA) narrowly passed the House of Representatives by 218 votes to 208 as a stand-alone bill, after congressional leaders uncoupled it from a worker-assistance program that crashed to defeat Friday when most Democrats voted against it in order to block the trade package.

TPA now heads to the U.S. Senate, where it could receive a vote as early as next week.

Holding the vote so soon after last week's blockage -- a major embarrassment for Obama, whose Democrats largely deserted him -- signalled Republican congressional leaders' confidence they have sufficient votes to get the entire package across the finish line.

Only 28 Democrats supported the measure, with 158 voting against, along with 50 Republicans.

House Speaker John Boehner offered little insight into what may have prompted the breakthrough.

"We're committed to ensuring that both trade promotion authority and trade adjustment assistance pass the House and Senate and go to the president for his signature," Boehner said.

"Getting this work done is critical to expanding opportunities for American workers and American-made goods."

TPA would boost Obama's chances of finalizing a sweeping trade accord with 11 other Pacific nations. He could then bring it to Congress for an up-or-down vote, with lawmakers not given a chance to modify it.

Many Democrats are concerned the trade deal would lead to a shedding of American jobs.

Seeing little prospect of blocking TPA, which is widely supported by Republicans, they lined up en masse against the TAA bill, which needed to pass for both bills to reach the president.

Hurdles remain. Top House Democrat Nancy Pelosi warned on Thursday that she "can't predict" that both bills would clear both chambers.

"I don't see a path right now for TAA," she told reporters.

Obama had huddled with pro-trade Democrat lawmakers at the White House on Wednesday on the sidelines of the congressional picnic, stressing he was ready to do what it takes to get the measures over the finish line.

"He reiterated his commitment to working with leaders in Congress to pass both TPA and TAA and made clear that he will only back a path forward that sends both bills to his desk," the White House said.

House Ways and Means Committee chairman Paul Ryan, in an appeal on the House floor before the vote, reminded members that "the world is watching us."

Ryan expressed disappointment that Democrats blocked the package last week, but warned "we're not going to be discouraged."

"Enacting trade promotion authority is critical for our economy and for our national security, and so we're going to get it done here today," he said.

Ryan and others spoke about America losing ground to its trade partners and competitors on the global stage, noting that since TPA lapsed in 2007 there have been 100 agreements worldwide, none of which have included the United States.

The Pacific trade agreement under negotiation would comprise an estimated 40 percent of global trade, a massive pact with Japan, Australia, Canada, Chile, Vietnam and other countries.

Supporters highlight TPA's 150 negotiating priorities for the United States, including provisions on labor rights, the environment, state-owned enterprises and efforts to curb currency manipulation by other nations, which critics say has led to the loss of millions of US jobs.

Progressive group Democracy for America blasted the "turncoat Democrats" who voted for TPA on Thursday, saying it will rally support to oust them from Congress in 2016.

"We will make certain that your vote to fast track the destruction of American jobs will be remembered and will haunt you for years to come," DFA chairman Jim Dean said.