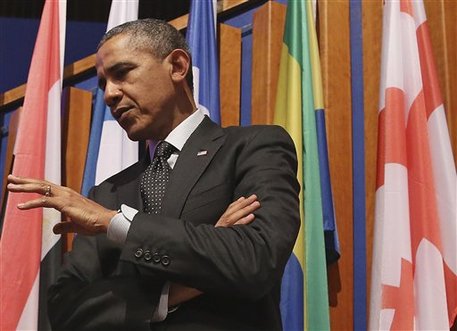 U.S. President Barack Obama on Friday lamented the "record levels" of people displaced by violence and other unrest around the globe, on the eve of World Refugee Day.

The United Nations this week reported that 60 million people -- half of them children -- have been forced to flee conflict and persecution.

"Tomorrow, on World Refugee Day, we will pause to reflect on the millions around the world who have been displaced from their homes -- the hardships they face, the courage and resilience they demonstrate, and the dedication of those who come to their aid," Obama said.

"The struggles of some are captured in searing images of people waiting at border crossings, housed in endless lines of tents, and crammed into rickety boats at sea, while those of others, crowded into the shadows of large cities, may go unobserved."

Amid domestic budget battles and rows over immigration, he called on Americans to "challenge themselves" and to be generous in helping those in need.