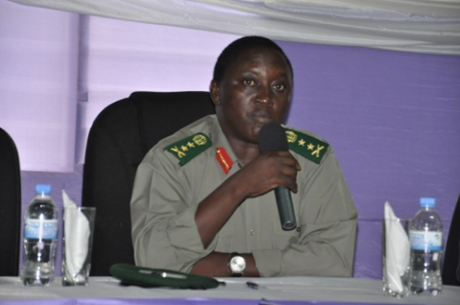 Prosecutors in Spain Tuesday called for the head of Rwanda's intelligence service Karenzi Karake to be handed over to Spanish authorities after his arrest in London, a judicial source said.

British police detained the 54-year-old at Heathrow airport on Saturday on a Spanish arrest warrant issued in an investigation of alleged crimes during the Rwanda conflict in the 1990s.

At the National Court, prosecutors asked a judge "to request the authorities to hand him over" to Spain to face terrorism charges, the judicial source told AFP.

The court could not say when the judge was likely to rule on the request.

British police said Karake was due to appear in court in London on Thursday.

The Spanish court launched an investigation in 2008 into allegations of genocide, war crimes, crimes against humanity and terrorism in Rwanda in the 1990s.

It later shelved the first three sets of charges but "the case is still active for the crimes of terrorism" in the case of eight Spanish people killed in Rwanda, the source told AFP.

Karake is part of a circle of top military officers in the former Rwandan Patriotic Front rebel movement.

That force ended the 1994 genocide by Hutu extremists which left an estimated 800,000 people dead, mostly Tutsis. Atrocities were also committed against Hutus.

The Spanish court's listing of Karake followed an investigation into the murder of nine Spaniards in Rwanda between 1994 and 2000 who were working with refugees.

The 2008 charge sheet said that Karake, known in Kigali as "KK", was accused of ordering massacres in an area in which three Spanish citizens working for the charity Medicos del Mundo were also killed.