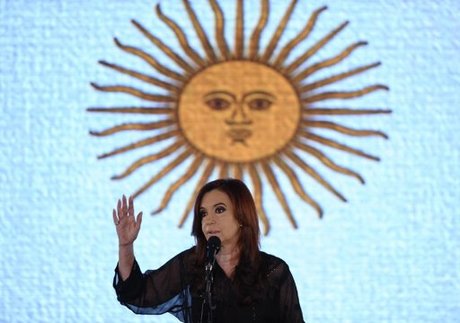 President Cristina Kirchner celebrated a landslide re-election victory in Argentine elections Sunday, giving an emotional speech a year after the death of her husband and political partner.

"I'm the first woman to be re-elected president. I don't want anything more," the center-left politician said to a rowdy crowd in a Buenos Aires hotel, after partial results gave her more than 53 percent.

Her closest rival, Hermes Binner, won 17 percent, according to the results from Interior Minister Florencio Randazzo, with 42 percent of votes counted.

"I'm impressed by the figures and infinitely grateful," Kirchner said. "If we'd spoken of these figures barely two years ago, they'd have thought we were mad!"

The 58-year-old incumbent has risen in the polls since losing a fierce battle with soya farmers over taxes in 2008, aided by strong economic growth backed by high prices for farm exports in the vast nation of 40 million.

She pushed forward with popular social programs started by her husband when he took office in 2003, including for pensions and child benefit as well as subsidies for transport and utilities.

"He's here more than ever," Kirchner said Sunday referring to him, also thanking a string of Latin American leaders, including Venezuelan President Hugo Chavez and Colombian President Juan Manuel Santos, for their support.

Nestor Kirchner was credited with lifting the country out of its financial meltdown of 2001 by restructuring massive debts and promoting spending.

Glamorous and known for her sharp tongue, Kirchner has shown a more consensual style, making efforts to improve relations with key sectors like industry and agriculture.

She needed just 40 percent to win if her nearest rival was more than 10 points behind, or 45 percent for an outright win.

The difference between her and her main rival was "historic," according to analyst Rosendo Fraga, from the New Majority institute.

Socialist Binner also celebrated however, after a first victory for his political movement over Argentina's radical party.

Many Argentines see Kirchner's policies as the safest bet for the economy amid uncertainty in Europe and the United States.