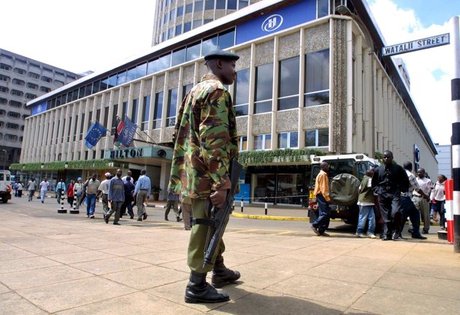 A grenade was thrown into a discotheque in the Kenyan capital Nairobi early Monday injuring 14 people, all Kenyans, in an attack police linked with recent threats made by Somali Shebab insurgents.

"Yes, we are linking the grenade attack to the threats that have been issued by Shebab and that is why I am appealing to city residents to be vigilant and cooperate with our officers," Antony Kibuchi, provincial police chief for Nairobi, said.

The U.S. embassy in Nairobi had warned Saturday of an "imminent threat" of attacks possibly targeting foreigners, one week after Kenyan forces crossed into Somalia to hunt down al-Qaida-linked Shebab fighters.

The embassy cited "credible information of an imminent threat of terrorist attacks directed at prominent Kenyan facilities and areas where foreigners are known to congregate, such as malls and night clubs."

"We will remain alert and we urge members of the public to remain alert as well," Kibuchi declared. "We have heightened security patrols and enforcement in the city."

The red-painted Mwauras disco is in the bustling center of Nairobi, popular with night-clubbers. An Agence France Presse journalist said few signs of damage were apparent from the outside of the building, which was guarded by a dozen police.

The injured were taken to Nairobi's Kenyatta National Hospital. A nurse said six of them suffered "bad injuries on the faces and head" while the rest had "minor injuries on the hands and legs."

Last week, Kenya sent troops across its border with Somalia to hunt Shebab insurgents it blames for the abductions of a British tourist, a disabled French woman who has since died in captivity and two Spanish aid workers.