Rice Book Recounts Threat to Quit over Disputes with Cheney 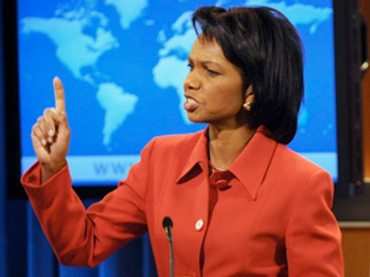 Condoleezza Rice says in a new book that she threatened to quit as president George W. Bush's national security advisor when she was cut out of a key decision on military trials for war-on-terror detainees, the New York Times wrote Sunday.

In her book "No Higher Honor: A Memoir of My Years in Washington," which arrives in bookstores next week, Rice describes a White House rife with discord, with repeated clashes between her and Vice President Dick Cheney over what to do about the detainees.

In November 2001, she writes in her memoir, she went to Bush to complain upon learning that he had issued an order prepared by the White House counsel, Alberto Gonzales, authorizing military commissions for detainees without telling her.

"If this happens again, either Al Gonzales or I will have to resign," she said she told Bush, who apologized, the Times said.

Along with then-secretary of state Colin Powell, she also questioned whether the Pentagon was deploying enough soldiers in Iraq to maintain stability.

"We now know that this was an error, and the chaos post-invasion contributed to the horrific descent into sectarian carnage over the following three years," she wrote.

Rice, who served as secretary of state in Bush's second term, portrays Cheney and his staff as "very much of one ultra-hawkish mind."

The Times said their most intense confrontation came in 2006 when she argued that terrorism suspects could not be "disappeared" as in some authoritarian states, and urged Bush to acknowledge holding Khalid Sheikh Mohammed and other suspects in secret prisons overseas.

Bush sided with Rice and moved the suspects to Guantanamo Bay, Cuba, the Times said.