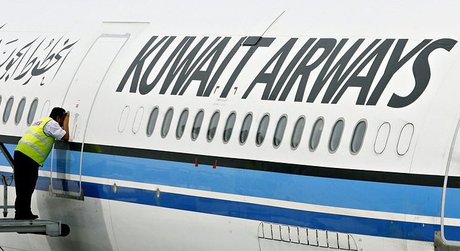 "We have started an open strike from today. It will continue until the government meets our legitimate demands of raising our wages," Abdullah al-Hajeri told Agence France Presse.

State-owned Kuwait Airways immediately cancelled three fights bound for Dubai, Doha and Jeddah and more flights were likely to be cancelled. All KAC scheduled flights have arrived so far.

Hajeri said that the union had called off a strike that was due to start earlier this month after the government promised to "meet most of the demands immediately, but nothing happened."

The government had agreed to increase the basic salary of all Kuwaiti employees by 30 percent but failed to deliver, said Hajeri, adding that the union has about 4,000 members, all nationals.

The government fears that if the strike continues, it will disrupt flights for thousands of Kuwaiti pilgrims who are due to travel to Saudi Arabia next week for the Muslim annual pilgrimage.

The oil-rich Gulf state of Kuwait has been hit by a wave of industrial action amid a major political showdown between the opposition and government in the wake of an alleged corruption scandal involving several MPs and possibly state officials.

Two weeks ago, more than 3,000 customs employees stopped work for two days demanding a pay raise and called off the strike after government promises to meet their demands.

The country has about 1.7 million foreign workers, mostly employed by the private sector.

The Gulf state, with 1.2 million Kuwaiti citizens, is tax-free and offers a cradle-to-grave welfare system with public services and fuel offered either free or at heavily subsidized prices.