Philippines Launches Air Strikes on Rebels after Death of 35 People 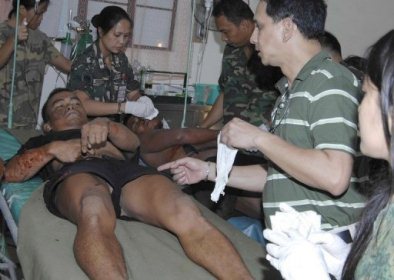 The Philippines on Monday launched its first air strikes in three years against Muslim separatist rebels in the restless south, after a series of attacks that left 35 people dead, the military said.

And while the government has been involved in peace talks with the rebel leadership since 2003 and the two sides are currently observing a ceasefire, the group targeted in Monday's bombing was a breakaway faction.

"The bombing attacks began at 11.30 am today," Cabunoc said.

"About 100 heavily armed bandits are holed up in their bunkers and running trenches."

There were no immediate reports of casualties, but the military said about 3,000 civilians had already fled the area last week.

He said a combined contingent of 200 police and military commandos on the ground were also involved in the operation.

The same group of rebels was blamed for ambushes that killed four soldiers and four policemen last Thursday.

More than 30 years of fighting have claimed about 150,000 lives and stunted efforts to develop the mineral-rich southern region.

Britain is a member of the so-called International Contact Group that is monitoring and supporting the peace talks.

"The current spate of ambushes must stop," he added.

But he warned that meeting violence with violence could "likely lead to a downward spiral of killing, with untold misery and suffering for innocent civilians".