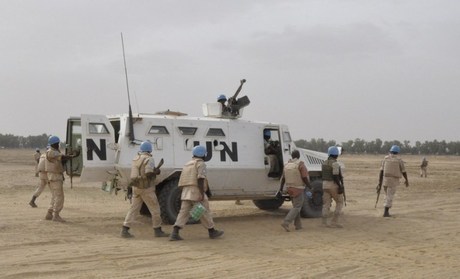 Militants killed at least six United Nations soldiers on Thursday in northern Mali, in one the deadliest ever attacks on the world's most dangerous peacekeeping mission, claimed by al-Qaida's north African arm.

MINUSMA, the U.N.'s force in the volatile west African nation, said its patrol was ambushed around 9:00 am (0900 GMT), 45 kilometers (28 miles) southwest of the city of Timbuktu on the road to Goundam.

"Preliminary reports indicate that six peacekeepers were killed and five others wounded. The evacuation of the wounded is in progress," it said in a statement.

The force said two of its vehicles had been destroyed, and that reinforcements had been sent to the area, backed from the air by helicopters.

A source within MINUSMA said the soldiers, from Burkina Faso, were victims of an "ambush" by heavily-armed fighters.

Mauritanian news agency al-Akhbar, which regularly carries credible claims of responsibility by jihadist groups, said it had received a statement from Al-Qaida in the Islamic Maghreb (AQIM) admitting the attack and putting the death toll at seven.

Thursday's attack was the largest loss of life for MINUSMA since nine of its soldiers were killed in the Gao region in an October ambush later claimed by the Movement for Oneness and Jihad in West Africa (MUJAO).

The U.N. says 35 peacekeepers have been killed in combat since MINUSMA's inception in 2013, not including Thursday's attack, making northern Mali the deadliest theater on earth for its personnel.

Three U.N. soldiers were wounded on May 28 when a convoy including the head of peacekeeping in Mali triggered landmines in the north, in an operation also claimed by AQIM.

MINUSMA's Danish commander Michael Lollesgaard and police commissioner Abdounasir Awale were on a field visit when a vehicle in their convoy hit a mine between the towns of Dire and Ber.

The force is regularly attacked by militants in the north, and was targeted for the first time in the capital Bamako in May, when a militant opened fire on a MINUSMA residence in the city's Faso Kanu neighborhood, wounding a civilian guard.

Lollesgaard said last month the mission lacked the training, logistics and intelligence capabilities to effectively carry out its operations.

"I possess some good assets but overall we have some major shortfalls that make us extremely vulnerable," he said.

The general said gaps in intelligence, as well troop training, safety and supplies were of major concern.

Lollesgaard also criticized the U.N.'s use of private carriers to supply troops working for MINUMSA, which had its mandate renewed for another year earlier this week.

"North of the Niger River, the hostilities are so imminent and the road conditions are so poor that it is irresponsible to keep on going there with old fragile civilian trucks that are unprotected and driven by people that are not soldiers," he said.

Security sources said on Wednesday the Malian army had killed three "terrorists" during a cross-border search operation for jihadists backed by Ivorian troops.

The exercise came after government and police buildings were ransacked in the southern Malian town of Fakola, 20 kilometers from Ivory Coast, on Sunday in an attack claimed by the Islamist militia Ansar Dine.

The group has also claimed responsibility for an attack on a military camp near the Mauritanian border on Saturday during which three soldiers and nine militants were killed.

Jihadist attacks are normally confined to Mali's restive northern desert region but areas bordering Mauritania have been targeted since the start of the year, and southern settlements more recently.

The north came under the control of Ansar Dine -- which is Arabic for Defenders of Faith -- AQIM and MUJAO, in April 2012.

A move south towards the capital by the extremists, who imposed a brutal version of sharia on inhabitants, prompted France to intervene in January 2013, pounding their positions in the north.

Their organizational structure smashed, small pockets of armed Islamists managed to remain active, and continue to carry out occasional deadly attacks in the desert.

The area around Goundam, a town of around 16,000 people some 100 kilometers (60 miles) southwest of Timbuktu, has seen regular violence, culminating in the killing of nine Malian soldiers in May by Tuareg-led rebels.