Malnutrition Brings a Terrible Disease to Children in Niger 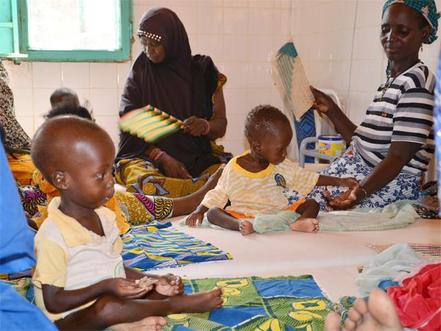 Mourdja's nose has been eaten away, like one lip and part of her upper gum, leaving the 13-year-old girl atrociously disfigured by noma, a disease that thrives on malnutrition.

"It was better before," the teenager says shyly and simply in the arid heartland of Niger, one of the world's poorest nations, clearly ill at ease and fiddling with her bracelets.

Mourdja can no longer look people in the eye, her face ravaged by the polymicrobial infection, which began by making her inflamed gums bleed. Just three days later, rapid tissue damage stole her beauty -- along with her childhood.

"The problem is that this is a very fast-acting disease," says nurse Fati Badamasi, who works for the Swiss NGO Sentinelles, active in Niger since 1992.

"The necrosis takes hold in 72 hours. If the patient comes to us with a blackish patch (on the face) it's already too late."

Ali Adah, who oversees the charity's work in the country on the southern edge of the Sahara, speaks of the fearful stench of noma, which "smells of decay, like a corpse".

"When I come to the office and we have a new case, I smell it straight away," he says.

Mourdja's flesh gave off that odour after she caught the infection sometimes called oro-facial gangrene, which can break out where food is short and lacks key vitamins and water is polluted.

Noma also strikes when natural immunity is at its lowest.

The teenager comes from a "very poor" family in the central Tahoua province, according to Aboubakar Moussa Mato, a social worker with Sentinelles. She lives with her parents and "about 10 brothers and sisters" in a straw hut "with no water or electricity".

"Noma is caused by malnutrition and a lack of hygiene," nurse Badamasi says. "It is a disease born of poverty. Well, in Niger there is plenty of poverty."

Niger is prone to food crises and holds the lowest place on the comprehensive Human Development Index drawn up each year by the United Nations Development Programme.

The birth rate is nonetheless a record 7.6 babies per woman, according to the UN, but in June 2014 more than 15 percent of children under five were famished. Between 4,000 and 6,000 infants die of malnutrition each year.

Most African countries have faced noma, like Laos in Asia and some South American nations, but Niger accounts for a large part of the 140,000 to 180,000 people infected every year worldwide, according to the UN World Health Organization, whose last complete data dates from 1998.

The last cases in Europe were recorded during the Second World War in Nazi concentration camps where Allied troops saw the appalling conditions first-hand towards the end of the conflict, says WHO expert Benoit Varenne. "That gives an idea of the kind of infection we're up against."

Reliable noma statistics for Niger are unavailable, but "90 percent of children die before receiving basic care", says Ibrahim Hamadou, who coordinates the National Programme Against Disease. "That means we only know the remaining 10 percent."

With help from Sentinelles, Mourdja will soon be flown to Geneva, where surgeons will rebuild her nose and her mouth. The girl will spend between six months to a year in the Swiss lakeside city for operations and reeducation before coming home.

Seymi, who lost the whole left side of his face to noma, has already been to Switzerland. Skin and muscle tissue lifted close to his thorax has been grafted over a gaping wound, but the boy remains badly disfigured. The disease ate away one of his eyes.

"What we do is half a miracle, but it's a very long way from perfect," says Brigitte Pittet, a surgeon and professor in the Geneva University Hospitals public sector group.

"It is very complex to reconstruct a nose in three dimensions with mucous membranes, the oral walls, the lips," Pittet adds, though there have been improvements down the years. Surgery practised on less badly affected children leaves hardly any trace of the damage.

Operations are extremely expensive and Niger's authorities are counting on a preventive information campaign and antibiotics.

"We show mothers frightful pictures to shock them" and incite them to take infected children for the swiftest possible care, Hamadou, a physician, says. "When noma is detected early enough, the results are spectacular."

This method works. Thanks to a rapid response, about 30 children treated at the end of May at Sentinelle's centre in the southern town of Zinder suffered no more than inflammations of the gums. But peaks of noma are expected with the coming rainy season.